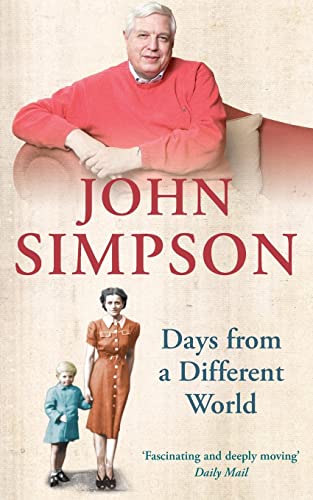 Days from a Different World
by John Simpson

In Stock
£4.49
John Simpson's best-selling memoir of his childhood, through which he also paints a vivid picture of Britain in the 1940s
Very Good Good
7 in stock

Days from a Different World Summary

Days from a Different World: A Memoir of Childhood by John Simpson

`I have already touched on my childhood in Strange Places, Questionable People. But the further through life I get the more I want to revisit it. I want to look at the whole of my childhood, the England I grew up in and my family.'

This is not a mere exercise in nostalgia, rather it is a journey through the England of the late 1940s in all its shabby wonder, which also tells the somewhat strange and often deeply painful story of John Simpson's family. Here we meet his father and his grandmother, still living in the small and rather depressing south London suburb which his family built, dominated and, finally, declined with. We meet the grandfather who drank the family money away and abandoned his wife and children, and the grandfather who toured the country with a Wild West show. We learn, too, of the broken marriages and the unfulfilled lives, of the people who died, and the lives which were just beginning. Candid, beautifully written and touching, Days from a Different World will enchant all those who read it.

John Simpson is the BBC's World Affairs Editor. He has twice been the Royal Television Society's Journalist of the Year and won countless other major television awards. He has written several books, including five volumes of autobiography, Strange Places, Questionable People , A Mad World, My Masters, News from No Man's Land and Not Quite World's End and a childhood memoir, Days from a Different World. The Wars Against Saddam, his account of the West's relationship with Iraq and his two decades reporting on that relationship encompassing two Gulf Wars and the fall of Saddam Hussein, and Unreliable Sources: How the Twentieth Century Was Reported are also published by Pan Macmillan. He lives in London with his South African wife, Dee, and their son, Rafe.

GOR000464068
Days from a Different World: A Memoir of Childhood by John Simpson
John Simpson
Used - Very Good
Paperback
Pan Macmillan
2006-09-11
416
0330435620
9780330435628
N/A
Book picture is for illustrative purposes only, actual binding, cover or edition may vary.
This is a used book - there is no escaping the fact it has been read by someone else and it will show signs of wear and previous use. Overall we expect it to be in very good condition, but if you are not entirely satisfied please get in touch with us.