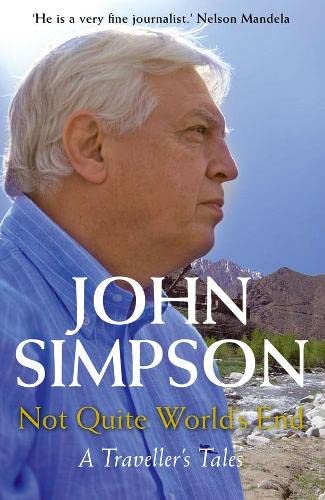 Not Quite World's End by John Simpson

A new volume of memoir and traveller's tales from John Simpson, in the vein of his bestselling A Mad World, My Masters

Not Quite World's End: A Traveller's Tales by John Simpson

John Simpson has been travelling the world as a journalist for forty years, reporting on the many disasters that have befallen us in that time. Today, at a time when many of us might legitimately believe that the end of the world truly is nigh, he takes a rather different view. For Simpson, perhaps better than anyone, knows that though war, disease, terrorism, natural disasters and crime always seem about to overwhelm us, the reality is that the great events that afflict us have not caused the world to stop turning. Some things change, indeed, but others stay much the same and we should perhaps remember that every generation worries about the things it reads in newspapers.

Here, then, Simpson looks at the world's troubles - the Middle East, global warming, population explosion - and takes the view that it's nowhere near its end. His vivid prose, humanity and clear-sightedness, and the wonderful anecdotes about the many strange people and peculiar places he has come across - from Robert Mugabe to the Bushmen of the Kalahari, from Chelsea to China, from Saddam Hussein to Hollywood stars - all add up to a richly satisfying read. And with his long experience and his remarkable ability to explain what's really going on out there, he offers us all a crumb of comfort in desperate times.

John Simpson is the BBC's World Affairs Editor. He has twice been the Royal Television Society's Journalist of the Year and won countless other major television awards. He has written several books, including five volumes of autobiography, Strange Places, Questionable People , A Mad World, My Masters, News from No Man's Land and Not Quite World's End and a childhood memoir, Days from a Different World. The Wars Against Saddam, his account of the West's relationship with Iraq and his two decades reporting on that relationship encompassing two Gulf Wars and the fall of Saddam Hussein, and Unreliable Sources: How the Twentieth Century Was Reported are also published by Pan Macmillan. He lives in London with his South African wife, Dee, and their son, Rafe.
GOR002998865
9781405050005
1405050004
Not Quite World's End: A Traveller's Tales by John Simpson
John Simpson
Used - Very Good
Hardback
Pan Macmillan
2007-10-05
480
N/A
Book picture is for illustrative purposes only, actual binding, cover or edition may vary.
This is a used book - there is no escaping the fact it has been read by someone else and it will show signs of wear and previous use. Overall we expect it to be in very good condition, but if you are not entirely satisfied please get in touch with us
Trustpilot