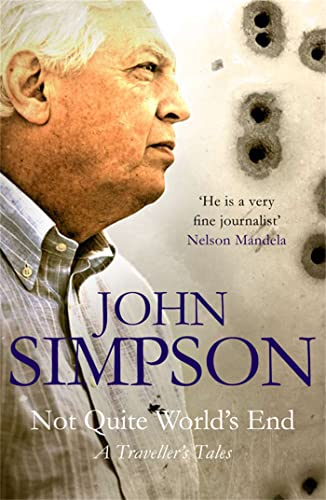 Not Quite World's End
by John Simpson

In Stock
£4.49
A new volume of memoir and traveller's tales from John Simpson, in the vein of his bestselling A Mad World, My Masters
Very Good
Only 3 left

Not Quite World's End Summary

Not Quite World's End: A Traveller's Tales by John Simpson

In Not Quite World's End, Simpson offers a lively and upbeat look at the challenges and the changes the world has gone through in his life and long career. In it, he looks at the world and takes the perhaps surprising view that it's actually not nor will be the end of the world. His vivid prose, his clear-sightedness and the wonderful anecdotes about the many strange people and places he has come across - from emperors to movie stars, from Chelsea to China - all add up to a richly satisfying read. And with his long experience and his remarkable ability to explain what's really going on out there, he offers us all a crumb of comfort in desperate times.

'He is a very fine journalist' Nelson Mandela

John Simpson is the BBC's World Affairs Editor. He has twice been the Royal Television Society's Journalist of the Year. He has also won three BAFTAs, including the Richard Dimbleby award in 1991 and the News and Current Affairs award in 2000 for his coverage, with the BBC News team, of the Kosovo conflict. He has written three volumes of autobiography, Strange Places, Questionable People , A Mad World, My Masters and News from No Man's Land, The Wars Against Saddam and, most recently, a childhood memoir, Days from a Different World.

GOR001206658
Not Quite World's End: A Traveller's Tales by John Simpson
John Simpson
Used - Very Good
Paperback
Pan Macmillan
2008-09-24
496
0330435604
9780330435604
N/A
Book picture is for illustrative purposes only, actual binding, cover or edition may vary.
This is a used book - there is no escaping the fact it has been read by someone else and it will show signs of wear and previous use. Overall we expect it to be in very good condition, but if you are not entirely satisfied please get in touch with us.