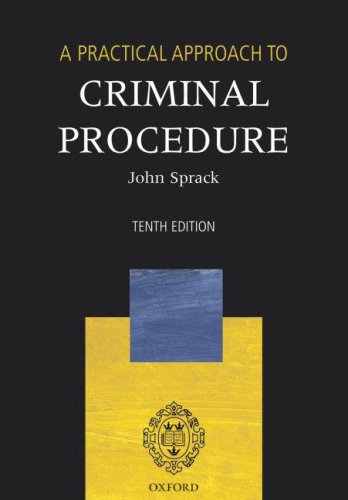 A Practical Approach to Criminal Procedure
by John Sprack

In Stock
£5.99
Providing a practical guide to the criminal process in England and Wales, this edition explains what happens before the accused appears in court, the way in which prosecutions are commenced, funding by the criminal defence service, and bail. It is useful as a reference for practitioners, and for students preparing for professional examinations.
Very Good Well Read
Only 3 left

A Practical Approach to Criminal Procedure by John Sprack

Formerly known as "Emmins on Criminal Procedure", this tenth edition provides a clear and practical guide to the criminal process in England and Wales. It explains what happens before the accused appears in court, the way in which prosecutions are commenced, funding by the criminal defence service, and bail. It describes proceedings in the magistrates' court, including summary trial and committal for sentence, as well as the way in which the youth court operates. Committal and transfer for trial are clearly explained and the process by which serious offences are sent direct to the Crown Court is also studied. Trial on indictment is discussed in detail as are sentencing and appeals. The tenth edition contains a detailed analysis of the impact of the Criminal Justice Act 2003 on criminal procedure as a whole. The book is divided into five parts, each covering the major elements of criminal procedure: preliminaries; the magistrates' court; the Crown Court; sentencing; and appeals. It is a useful reference for the busy practitioner and essential reading for students preparing for professional examinations.

John Sprack is Chairman of the Employment Tribunal and has been a practising barrister for a number of years. He was formerly Reader of Law at the Inns of Court School of Law, and has written and contributed to several publications on criminal procedure, including Blackstone's Criminal Practice and Criminal Evidence and Procedure 2/e.

I - INTRODUCTION; 1. Setting the Scene; 2. Preliminaries on Court Appearance; 3. Prosecution; 4. The Decision to Prosecute; II - THE MAGISTRATES' COURT; 5. Magistrates and their Courts; 6. Bail and Remedies; 7. Mode of Trial; 8. Disclosure; 9. Course of a Summary Trial; 10. Trial of Juveniles; 11. Committal for Sentence; 12. Committal for Trial, and the Alternatives; III - TRIAL ON INDICTMENT; 13. The Crown Court; 14. The Indictment; 15. Pre-Trial Proceedings; 16. Pleas; 17. The Jury; 18. The Course of the Trial; 19. The Verdict; IV - SENTENCING; 20. Procedure before Sentencing; 21. Determining the Sentence; 22. Custodial Sentences; 23. Sentences other than Custody; V - APPEALS FROM THE CROWN COURT; 24. Appeals from the Crown Court; 25. Appeals from the Magistrates' Courts; 26. The European Dimension; 27. Ancillary Financial and Property Orders; APPENDIX 1 - OFFENCES AGAINST THE PERSON CHARGING STANDARD; APPENDIX 2 - NATIONAL MODE OF TRIAL GUIDELINES; APPENDIX 3 - CODE OF PRACTICE ON DISCLOSURE; APPENDIX 4 - PLEA AND DIRECTIONS HEARING: JUDGE'S QUESTIONNAIRE; APPENDIX 5 - IMAGINARY BRIEF; APPENDIX 6 - TRIAL PROCEDURE IN OUTLINE; APPENDIX 7 - INTERNET SITES; APPENDIX 8 - EXTRACTS FROM THE AULD REPORT

GOR003581112
A Practical Approach to Criminal Procedure by John Sprack
John Sprack
Practical Approach S.
Used - Very Good
Paperback
Oxford University Press
2004-10-14
704
0199272573
9780199272570
N/A
Book picture is for illustrative purposes only, actual binding, cover or edition may vary.
This is a used book - there is no escaping the fact it has been read by someone else and it will show signs of wear and previous use. Overall we expect it to be in very good condition, but if you are not entirely satisfied please get in touch with us.