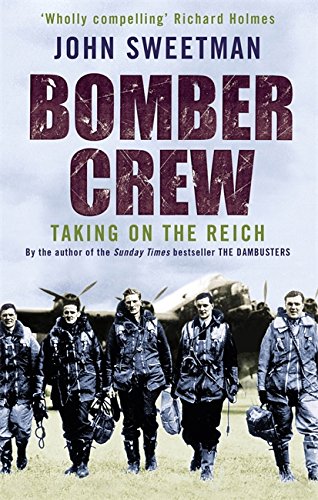 In Stock
£3.99
A unique account of the lives and raids of British bomber crews during the Second World War, based on original research and written by the bestselling author of THE DAMBUSTERS.
Very Good Good
5 in stock

Bomber Crew: Taking On the Reich by John Sweetman

During the Second World War aeronautical technology gathered rapid pace. By 1945, bombers had not only greatly increased in engine power and range, but the bombs which they carried rose from 250lbs to 10 tons; the navigator's pencil and rubber of 1939 had been supplemented by infinitely more sophisticated electronic aids. Yet the success or failure of each and every bomber still depended entirely on the efficiency of every member of the crew at his individual position, the interaction and co-operation of all crew members as a body. One member of 617 squadron graphically explained that 'every time we went out, it was seven men against the Reich'.
Drawing on letters, journals and diaries, John Sweetman examines the lives the bomber crews lived, from the highs and lows of their missions to the complexities of their friendships and the impact their place in the war had on the families and loved ones they left behind. Part collective biography, part military history, part social history: this will remain the definitive account of the bomber crews of the Second World War for years to come.

This is a wholly compelling story of Bomber Command's war, using a mass of fresh sources. The accounts are brave, shocking, poignant and matter-of-fact, tales of ordinary men doing quite extraordinary things * Richard Holmes, author of TOMMY: THE BRITISH SOLDIER ON THE WESTERN FRONT *
Excellent . . . John Sweetman shows how the crews lived life on the edge * David Stafford, author of TEN DAYS TO D-DAY *
A detailed, well-researched social and military history. * SUNDAY EXPRESS *
This moving and highly readable volume vividly portrays the experiences of these young men and the loved ones many of them left behind. * SUNDAY TELEGRAPH *

John Sweetman worked for many years at the Royal Military Academy Sandhurst, first as Senior Lecturer in War Studies and then as Head of Defence and International Affairs. He is the author of numerous publications including the acclaimed and bestselling THE DAMBUSTERS.

GOR002823841
Bomber Crew: Taking On the Reich by John Sweetman
John Sweetman
Used - Very Good
Paperback
Little, Brown Book Group
2005-06-02
288
0349117969
9780349117966
N/A
Book picture is for illustrative purposes only, actual binding, cover or edition may vary.
This is a used book - there is no escaping the fact it has been read by someone else and it will show signs of wear and previous use. Overall we expect it to be in very good condition, but if you are not entirely satisfied please get in touch with us.