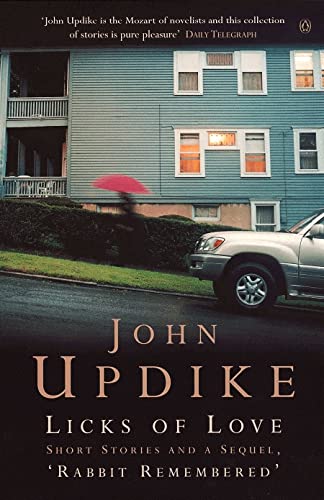 Licks of Love
by John Updike

In Stock
£13.99
Janice and Nelson Angstrom, and several other survivors of the irreducible Rabbit, fitfully entertain his memory while pursuing their own happiness over the edge of the millennium, as a number of old strands come together in entirely unexpected ways.
Very Good Good Well Read
Only 3 left

Licks of Love: Short Stories And a Sequel, 'Rabbit Remembered' by John Updike

Collected with a dozen wonderful stories, all set in classic Updike territory, the short novel 'RABBIT REMEMBERED' is a major work in its own right - a riveting return to Updike's most celebrated fictional world. Janice and Nelson Angstrom, plus several other survivors of the irreducible Rabbit, fitfully entertain his memory while pursuing their own happiness over the edge of the millennium, as a number of old strands come together in entirely unexpected ways.

GOR001185552
Licks of Love: Short Stories And a Sequel, 'Rabbit Remembered' by John Updike
John Updike
Penguin Modern Classics
Used - Very Good
Paperback
Penguin Books Ltd
2002-03-28
368
0140298967
9780140298963
N/A
Book picture is for illustrative purposes only, actual binding, cover or edition may vary.
This is a used book - there is no escaping the fact it has been read by someone else and it will show signs of wear and previous use. Overall we expect it to be in very good condition, but if you are not entirely satisfied please get in touch with us.