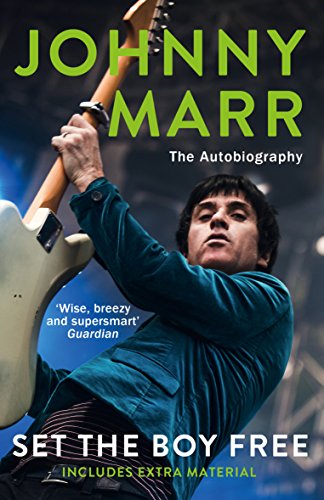 In Stock
£7.49
The Sunday Times Bestseller and Winner of the NME Best Book Award 2017 Few groups have had a bigger impact than The Smiths and few musicians are as celebrated as Johnny Marr. His signature sound was crucial to the Smiths success, but tensions within the band led to his departure in 1987 and the end of the group after just four albums.
Like New Very Good Good Well Read
5 in stock

The Sunday Times Bestseller and Winner of the NME Best Book Award 2017 Few groups have had a bigger impact than The Smiths and few musicians are as celebrated as Johnny Marr. He is an icon who defined an era and influenced a generation of guitarists. His signature sound was crucial to the Smiths success, but tensions within the band led to his departure in 1987 and the end of the group after just four albums. He was twenty-three years old. Since then, Marr hasn't stopped pushing the boundaries of music. He joined The Pretenders, The The, Modest Mouse and The Cribs and has collaborated with Hans Zimmer. Here, for the first time, he tells his own side of the story. Honest, witty, and moving, Set the Boy Free is the true history of music - told by one of its very own legends. 'I saw Johnny Marr live in person, with The Smiths. He was light on his feet; like quicksilver. He caused the band to swing like crazy. And he smoked his cigarette like a star. I've been influenced ever since.' Iggy Pop

". . . wise, breezy, supersmart memoir . . . Marr's defiantly unghostwritten book is pleasant and direct . . ." * Guardian *
"An unpretentious, clearly written memoir recounting his journey from a working-class upbringing on the outskirts of Manchester to his status as a musical polymath" * The Times *
"Set the Boy Free - a telling title again - is much more than an obituary for a brilliant band. It's also a love letter to the women in Marr's life ... and a guide on how to keep changing and moving on with your creative life." * The Observer *
"It is a pleasure .... to read a memoir by a five-star guitar hero that ... present[s] a particular life in rock as one of pure, disarming joy and open possibility" * New Statesman *
"The perfect book for aspiring musicians" * Evening Standard *
"Excellent" * The Sun *
"Set the Boy Free is a trip down memory lane featuring the all-star cast that Marr has rubbed shoulders with ... and it will likely serve as a guidebook to anyone who's ever dreamed about picking up the guitar and trying their hand at making music for a living because, at its heart, Set the Boy Free is written by a music fan for music fans." * Esquire *
"His sweetly and deceptively simple account of his lively youth and The Smith's early, joyous years ... will touch many" * Mail on Sunday *
"Grounded and positive" * MOJO *
"His writing is compassionate, courageous and concerned" * Gigwise *
"Set The Boy Free tells the ordinary yet fascinating story of arguably one of the most influential guitar players of all time" * The Pool *
"An excellent memoir. . . Stars don't come much brighter than Johnny Marr ... And it's a pleasure to hear the story from the man himself" * Manchester Evening News *
"Smiths fans will love it for the insight into the songs ... He is relentlessly upbeat and positive" * RTE Radio Arena Show *
"Set The Boy Free aims to set the record straight on the story of one of rock's most contentious break-ups" * Hot Press *
"Marr's directness is refreshing" * AV Club *
"A must read for indie fans" * Vive le Rock *

Johnny Marr is a musician and songwriter. Between 1982 and 1987 he was the guitarist and co-founder of The Smiths. He is now an established solo artist who has released two albums, The Messenger and Playland, to date. He currently lives in Manchester.

GOR009105669
Set the Boy Free by Johnny Marr
Johnny Marr
Used - Well Read
Paperback
Cornerstone
2017-05-29
480
1784751790
9781784751791
N/A
Book picture is for illustrative purposes only, actual binding, cover or edition may vary.
This is a used book - there is no escaping the fact it has been read by someone else and it will show signs of wear and previous use. Overall we expect it to be in very good condition, but if you are not entirely satisfied please get in touch with us.