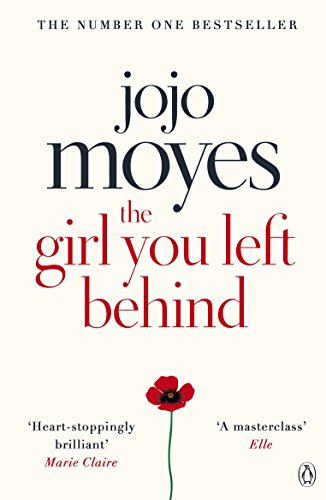 The Girl You Left Behind
by Jojo Moyes

Used Price
£2,99
New RRP £8,99
Free Shipping in the UK
France, 1916. Sophie Lefevre must keep her family safe whilst her adored husband Edouard fights at the front. When she is ordered to serve the German officers who descend on her hotel each evening, her home becomes riven by fierce tensions.
Very Good Good Well Read

The Girl You Left Behind Summary

The Girl You Left Behind: The number one bestselling romance from the author of Me Before You by Jojo Moyes

The Girl You Left Behind is the hauntingly romantic and utterly irresistible weepy from Jojo Moyes, the author of the international bestsellers Me Before You and Still Me.

'This won't disappoint. A masterclass in storytelling that fans of Me Before You will adore' Elle
___________

What happened to the girl you left behind?

Sophie Lefevre must keep her family safe whilst her adored husband Edouard fights at the front. But when she is ordered to serve the German officers who descend on her hotel each evening, her home becomes a place of fierce tensions.

And from the moment the new Kommandant sets eyes on Sophie's portrait - painted by Edouard - a dangerous obsession is born, which will lead Sophie to make a dark and terrible decision . . .

Almost a century later, and Sophie's portrait hangs in the home of Liv Halston, a wedding gift from her young husband before he died. A chance encounter reveals the painting's true worth, and its troubled history.

A history that is about to resurface and turn Liv's life upside down all over again . . .

In The Girl You Left Behind two young women, separated by a century, are united in their determination to fight for what they love most - whatever the cost.
____________

'Wonderfully well-written and completely engrossing . . . It will make you think long after you turn the final page' Daily Mail

'A truly beautiful book . . . will make you laugh, cry and ignore everyone around you as you won't be able to put it down!' 5* reader review

'Beware, once you pick up this book you will not be able to put it down!' 5* reader review

The Girl You Left Behind Reviews

Praise for The Girl You Left Behind * - *
Moyes is the queen of the classy weepy and this won't disappoint. A masterclass in story-telling that fans of Me Before You will adore * Elle *
Another heart-stoppingly brilliant novel from Jojo Moyes * Marie Claire *
Jojo Moyes paints a genuinely moving, beautiful picture of how love and belief will ultimately win the war, even if they can't win the battle. The Girl You Left Behind is a true work of art * Fabulous Magazine *
Wonderfully well-written and completely engrossing, with exquisitely drawn characters in a brilliantly plotted narrative. It will make you think long after you finish the final page * Daily Mail *
Even as Moyes tackles the inflammatory issues around art stolen during wartime, she never loses sight of the driving engine of her narrative . . . this pleasurably assured writer skilfully balances the quotidian and the comic with the broad and universal, leaving us with the tantalising possibility of a potential caper to come * Independent on Sunday *

Jojo Moyes is a novelist and journalist. Her books include the bestsellers Me Before You, After You and Still Me, The Girl You Left Behind, The One Plus One and her short story collection Paris for One and Other Stories. Her novels have been translated into forty-six languages, have hit the number one spot in twelve countries and have sold over thirty-eight million copies worldwide.

Me Before You has now sold over fourteen million copies worldwide and was adapted into a major film starring Sam Claflin and Emilia Clarke. Jojo lives in Essex.

GOR003879557
The Girl You Left Behind: The number one bestselling romance from the author of Me Before You by Jojo Moyes
Jojo Moyes
Used - Very Good
Paperback
Penguin Books Ltd
2012-09-27
560
0718157842
9780718157845
N/A
Book picture is for illustrative purposes only, actual binding, cover or edition may vary.
This is a used book - there is no escaping the fact it has been read by someone else and it will show signs of wear and previous use. Overall we expect it to be in very good condition, but if you are not entirely satisfied please get in touch with us.