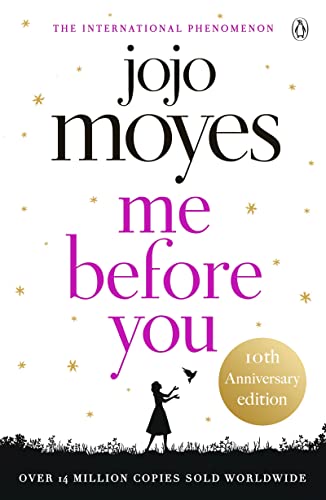 Me Before You
by Jojo Moyes

In Stock
£3.99
Lou Clark knows lots of things. She knows how many footsteps there are between the bus stop and home. She knows she likes working in The Buttered Bun tea shop and she knows she might not love her boyfriend Patrick. What Lou doesn't know is she's about to lose her job or that knowing what's coming is what keeps her sane.
Very Good Good Well Read
505 in stock

Me Before You Summary

Me Before You: The international bestselling phenomenon by Jojo Moyes

Will needed Lou as much as she needed him, but will her love be enough to save his life?

Lou Clark knows lots of things. She knows how many footsteps there are between the bus stop and home. She knows she likes working in The Buttered Bun teashop and she knows she might not love her boyfriend Patrick.

What Lou doesn't know is she's about to lose her job or that knowing what's coming is what keeps her sane.

Will Traynor knows his motorcycle accident took away his desire to live. He knows everything feels very small and rather joyless now and he knows exactly how he's going to put a stop to that.

What Will doesn't know is that Lou is about to burst into his world in a riot of colour. And neither of them knows they're going to change the other for all time.

'You simply have to read it' Closer

Me Before You Reviews

You might have seen the film, but we promise the book is better - you won't be able to forget quirky Lou's joruney with Will as she becomes his caregiver and their relationship blossoms. You will be needing tissues * Living North *
Poignant . . . heartfelt . . . Me Before You, at it's heart, is about two people who properly listen to each other; it is something good * The Independent on Sunday *
Another powerful love story. A deftly plotted narrative populated with likeable engaging characters . . . a bittersweet story about love, learning and letting go. It's a tremendous read and I loved it * Daily Mail *
When I finished this novel, I didn't want to review it: I wanted to reread it . . . An affair to remember * The New York Times Book Review *
At last, a new Moyes novel - and it's a triumph. Her story of love blossoming in the most unlikely of ways packs such an emotional punch, you'll need a box of tissues * Elle *
Compelling, moving and absorbing. It's also a real weepie * Daily Express *
Keep the tissues close as Jojo Moyes returns with Me Before You, a heartbreaking yet ultimately uplifting tale about the relationship between an embittered quadriplegic man and the carer who is trying to give him a reason to live * Good Housekeeping *
A compelling novel of life and death decisions and unlikely affections. It's magical and heartbreaking, but doesn't shy away from difficult emotional realities. Waterproof mascara essential * Marie Claire *
A disarmingly moving love story . . . a lovely novel, both nontraditional and enthralling * Publishers Weekly *
This truly beautiful story made us laugh, smile and sob like a baby - you simply have to read it * Closer *
Heartbreaking, soul-searching and utterly compelling * Easy Living *
Destined to be the novel that friends press upon each other more than any other next year, it is a tremendous example of what commercial fiction can do when in the hands of an expert. Moyes does a majestic job of conjuring a cast of characters who are charismatic, credible and utterly compelling; Lou and Will are a couple who readers will take to their hearts as they did One Day's Emma and Dex * The Independent *
Poignant and beautifully written, this book will stay with you long after you've put it down * Star Magazine *
Funny, believable and heartbreaking, this is sure to be the weepy of 2012 * Woman's Own *
A compelling portrait of an unlikely couple * The Independent *
Me Before You is a page-turner that sucks the reader into caring about the fate of the heroine . . . By turns funny and moving but never predictable. The plot contains a number of surprises and raises thoughtful questions * USA Today *
A perceptive and moving tale * The Independent *
Funny, surprising and heartbreaking, populated with characters who are affecting and amusing . . . This is a thought-provoking, thoroughly entertaining novel that captures the complexity of love * People *
Beautifully written * The Sun *
An unlikely love story . . . To be devoured like candy, between tears * O, The Oprah Magazine *
Read it and weep: Heartbreak collides with humour in Jojo Moyes's Me Before You * Good Housekeeping USA *
Jojo Moyes has done it again with this funny, touching tale that is impossible to put down. Make sure you have a box of tissues to hand! * Candis *
When I finished this novel, I didn't want to review it: I wanted to reread it. Which might seem perverse if you know that for most of the last hundred pages I was dissolved in tears. Jojo Moyes, the writer who produced this emotional typhoon, knows very well that Me Before You . . . is a 'real weepy'. Moyes's story provokes tears that are redemptive, the opposite of gratuitous. Some situations, she forces the reader to recognise, really are worth crying over . . . An affair to remember * Liesl Schillinger, The New York Times Book Review *
Jojo Moyes's poignantly romantic tales have readers streaming their way through boxes of Kleenex . . . Me Before You is compelling reading...a profound, fundamental, thought-provoking conundrum lies at the heart of the story, a huge moral dilemma, explored with great fictional finesse. Devotees of Jojo Moyes and newcomers alike will settle into this entertaining book with gusto * Sunday Express *
Romantic, thought-provoking tear-jerker than you won't be able to put down * Woman & Home *
The Last Letter from Your Lover manages to be a both gorgeously romantic and partner-ignoringly compulsive read * Independent on Sunday *
Utterly absorbing and blissfully romantic * Daily Telegraph *
A small-life-big-dreams weepie that'll have you snivelling ecstatically into your cocoa * Daily Mail *
The only book that ever made me cry - I wept so much I thought I might not stop! * Lisa Jewell, bestselling author of Watching You *

Jojo Moyes is a novelist and journalist. Her books include the bestsellers Me Before You, After You and Still Me, The Girl You Left Behind, The One Plus One and her short story collection Paris for One and Other Stories. Her novels have been translated into forty-six languages, have hit the number one spot in twelve countries and have sold over thirty-eight million copies worldwide.

Me Before You has now sold over fourteen million copies worldwide and was adapted into a major film starring Sam Claflin and Emilia Clarke. Jojo lives in Essex.

GOR003385204
Me Before You: The international bestselling phenomenon by Jojo Moyes
Jojo Moyes
Used - Very Good
Paperback
Penguin Books Ltd
2012-01-05
512
0718157834
9780718157838
N/A
Book picture is for illustrative purposes only, actual binding, cover or edition may vary.
This is a used book - there is no escaping the fact it has been read by someone else and it will show signs of wear and previous use. Overall we expect it to be in very good condition, but if you are not entirely satisfied please get in touch with us.