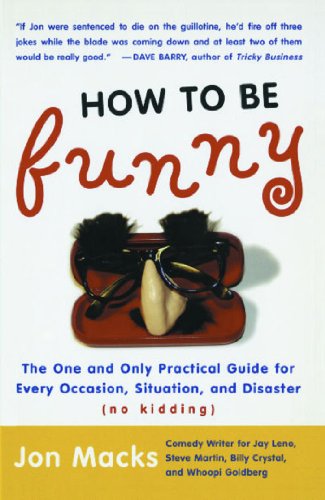 How to Be Funny
by Jon Macks

In Stock
£3.59
An invaluable guide on how to "lighten up," written by a distinguished pro who has provided laughs for Jay Leno, Billy Crystal, Steve Martin, Robin Williams, Whoopi Goldberg, and many others.
Good
Only 1 left

How to Be Funny Summary

How to Be Funny: The One and Only Practical Guide for Every Occasion, Situation, and Disaster (no kidding) by Jon Macks

An invaluable guide on how to "lighten up" from a distinguished pro who has provided laughs for JAY LENO, BILLY CRYSTAL, STEVE MARTIN, ROBIN WILLIAMS, BRAD GARRETT, WHOOPI GOLDBERG, AND MANY MORE.
Who hasn't wished for the perfect withering comeback line, a clever tension-breaking quip, or a winning flirtatious remark? Being funny is hard work and not everyone is a natural. How to Be Funny is a witty guide that teaches readers precisely how to be funnier in everyday life. It's a must-read for anyone who has to speak in public, be engaging and funny at work or at play, or who hopes to one day go out on a date.
Jon Macks, a comedy writer for The Tonight Show with Jay Leno, the Academy Awards, the Emmy Awards, Hollywood Squares, and the nation's top comedians, politicians, and corporate leaders, knows his funny business. Here he demystifies the process of making people laugh, breaks down the basic building blocks and types of humor -- which include self-deprecation, misdirection, deadpan delivery, sarcasm, and "the reverse" -- and reveals the best approaches to use in common situations.
How to Be Funny features helpful (and hilarious) tips and anecdotes from the comic legends Mack's worked with -- including Jay Leno, Arsenio Hall, Gilbert Gottfried, Billy Crystal, Rita Rudner, Dave Barry, and Carrie Fisher -- in his eleven years as one of the nation's top television writers.
Whether the goal is to give a memorable public address or deliver a killer line with friends, How to Be Funny is a charming, instructive, and practical read.

Jon Macks, author of Heaven Talks Back, From Soup to Nuts, and Fuhgeddaboutit, is a writer for The Tonight Show with Jay Leno. He has written for seven Academy Awards shows, nine Emmy Awards shows, and has a weekly comedy segment on The Paul Harris Radio Show on The Big 550/KTRS St. Louis. In addition, he writes for Hollywood Squares and for over a dozen of the nation's top comedians, politicians, corporate leaders, and sports commentators. He lives in Los Angeles.

GOR005628060
How to Be Funny: The One and Only Practical Guide for Every Occasion, Situation, and Disaster (no kidding) by Jon Macks
Jon Macks
Used - Good
Paperback
Simon & Schuster
2003-09-02
192
0743204727
9780743204729
N/A
Book picture is for illustrative purposes only, actual binding, cover or edition may vary.
The book has been read but remains in clean condition. All pages are intact and the cover is intact. Some minor wear to the spine.