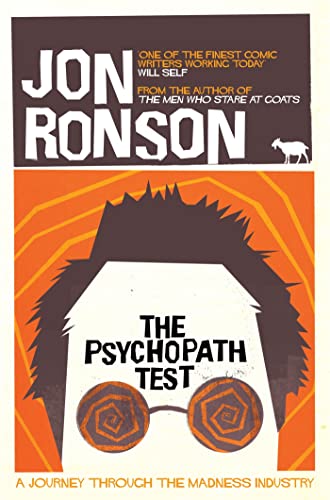 The Psychopath Test
by Jon Ronson

In Stock
£4.49
The Sunday Times top ten bestseller from the author of The Men Who Stare at Goats.
Very Good Good Well Read
137 in stock

The Psychopath Test by Jon Ronson

What if society wasn't fundamentally rational, but was motivated by insanity? This thought sets Jon Ronson on an utterly compelling adventure into the world of madness.

Along the way, Jon meets psychopaths, those whose lives have been touched by madness and those whose job it is to diagnose it, including the influential psychologist who developed the Psychopath Test, from whom Jon learns the art of psychopath-spotting. A skill which seemingly reveals that madness could indeed be at the heart of everything . . .

Combining Jon Ronson's trademark humour, charm and investigative incision, The Psychopath Test is both entertaining and honest, unearthing dangerous truths and asking serious questions about how we define normality in a world where we are increasingly judged by our maddest edges.

I began The Psychopath Test late at night, tired, dispirited and ill - then found myself laughing like the proverbial loon for page after page. -- Will Self * Guardian *
The belly laughs come thick and fast - my God, he is funny . . . Ronson's new book is provocative and interesting, and you will, I guarantee, zip merrily through it. * Observer *

GOR003534278
The Psychopath Test by Jon Ronson
Jon Ronson
Used - Very Good
Paperback
Pan Macmillan
2012-01-05
304
0330492276
9780330492270
Short-listed for National Book Awards Popular Non-Fiction Book of the Year 2012 (UK)
Book picture is for illustrative purposes only, actual binding, cover or edition may vary.
This is a used book - there is no escaping the fact it has been read by someone else and it will show signs of wear and previous use. Overall we expect it to be in very good condition, but if you are not entirely satisfied please get in touch with us.