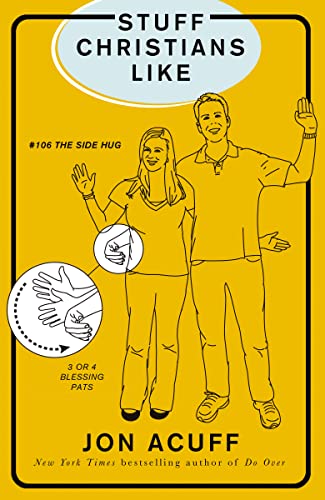 In Stock
£1.99
Using the same humor and honesty that galvanized more than a million online readers from more than 200 countries, blogger Jonathan Acuff brings his insightful take on Christianity to the book world with Stuff Christians Like. From prayer shot blocks to Metro worship leaders, no stone is left unturned in this hilarious look at faith.
Very Good
Only 2 left

Sometimes, we fall in love on mission trips even though we know we'll break up when we get back. Sometimes, you have to shot block a friend's prayer because she's asking God to bless an obviously bad dating relationship. Sometimes, you think, "I wish I had a t-shirt that said `I direct deposit my tithe' so people wouldn't judge me." Sometimes, the stuff that comes with faith is funny. This is that stuff. Jonathan Acuff's Stuff Christians Like is your field guide to all things Christian. In it you'll learn the culinary magic of the crock-pot. Think you've got a Metro worship leader-Use Acuff's checklist. Want to avoid a prayer handholding faux pas? Acuff has you covered. Like a satirical grenade, Acuff brings us the humor and honesty that galvanized more than a million online readers from more than 200 countries in a new portable version. Welcome to the funny side of faith.

After creating his answer to the blog 'Stuff White People Like,' Christian blogger Acuff saw his satirical Web site become a popular Internet destination. His best essays, accompanied by childlike illustrations, comprise this book, which maintains the structure of his short posts. From sexual purity to crock pots to clapping during worship, Acuff uses a standup comedy style to laugh with Christians at their private conventions. Readers will learn the unspoken rules of Christian living, including the (in)appropriate use of God's name to avoid a speeding ticket and obligations to 'think about going into full-time ministry at least once every three years.' Entries such as the diagram of a metrosexual worship leader mimic the truth-telling wit of the Web site ChurchMarketingSucks.com and will appeal most to young Christian hipsters. Sarcasm masks a deeper layer of commentary that exposes hypocrisies and faith flaws, and readers may want to amend these behaviors to avoid becoming the subject of Acuff's newest jokes on his blog. Acuff's ability to point out unbecoming idiosyncrasies while inducing a knee slap is stuff readers will like. (Apr.) * Publishers Weekly *
Yes, the popular blog-turned-paperback Stuff Christians Like is a direct rip-off of the even more popular blog-turned-paperback Stuff White People Like. And yes, one of the things Christians like is making their own versions of "secular" intellectual property. Acuff's is not the first book of insider evangelical observational humor (see Patricia Klein, Joel Kilpatrick, Matthew Paul Turner), but his background as a trend hunter at an advertising company makes it sharper than most. It's also far more accurate sociology than all the sour-faced "explaining evangelicalism" books that came out after Bush's reelection. * Christianity Today *

For the last ten years, Jonathan Acuff has written advertising for clients ranging from the Home Depot to Chick-fil-A. In addition to his many day jobs, he also writes a blog called www.stuffchristianslike.net. He and his wife live with their two daughters outside of Atlanta, Georgia.

GOR005569204
Stuff Christians Like by Jonathan Acuff
Jonathan Acuff
Used - Very Good
Paperback
Zondervan
2010-03-05
208
0310319943
9780310319948
N/A
Book picture is for illustrative purposes only, actual binding, cover or edition may vary.
This is a used book - there is no escaping the fact it has been read by someone else and it will show signs of wear and previous use. Overall we expect it to be in very good condition, but if you are not entirely satisfied please get in touch with us.