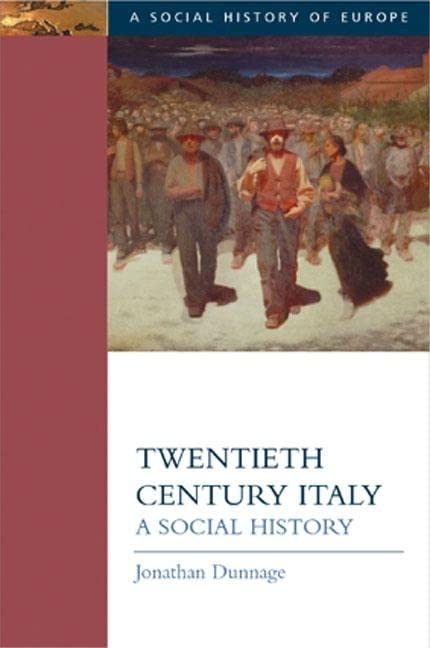 Out of Stock
Italy has undergone a social, political and economic transformation during the 20th century. This social history looks at the everyday life of Italians against a dramatic backdrop of the move to mass politics, fascism, war, economic boom, and organized crime and corruption.
Very Good
Only 0 left

Following a historically chronological approach, and with a clear focus on the marked regional diversity characterising Italy, this volume analyses the impact of social, economic, cultural and political transformation on the lives of Italians. It assesses their living standards, their health and education, their working conditions and their leisure activities. The final part of the book examines contemporary Italian society in the light of the political and moral crisis of the early 1990s.

'The first comprehensive social history of the period to appear in English.'

Jonathan Dunnage is a lecturer in the Italian Department (School of European Languages)at the University of Wales, Swansea.

Introduction: between tradition and modernity. 1. Italian society in the wake of the Risorgimento, 1860-1914. 2. Social fragmentation and violence in italy, 1915-25. 3. The experience of Fascism, 1925-39. 4. War, civil conflict and the defeat of Fascism, 1940-50. 5. Social, cultural and economic transformation in post-war Italy (1950-1980). 6. Affluence and moral crisis: Italian society in the eighties and nineties. Conclusion: Italian society at the dawn of the twenty-first century. Appendix I: chronology. Appendix II: glossary. Select bibliography. Index.

GOR002807283
Twentieth Century Italy: A Social History by Jonathan Dunnage
Jonathan Dunnage
Social History of Europe
Used - Very Good
Paperback
Pearson Education Limited
2002-11-04
284
0582292786
9780582292789
N/A
Book picture is for illustrative purposes only, actual binding, cover or edition may vary.
This is a used book - there is no escaping the fact it has been read by someone else and it will show signs of wear and previous use. Overall we expect it to be in very good condition, but if you are not entirely satisfied please get in touch with us.