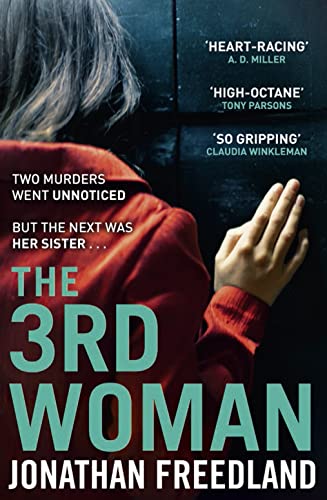 The 3rd Woman
by Jonathan Freedland

THE FIRST TWO MURDERS WENT UNNOTICED. BUT THE NEXT WAS HER SISTER...
A terrifying yet unputdownable thriller from No. 1 bestselling author and award-winning journalist Jonathan Freedland.

The 3rd Woman by Jonathan Freedland

THE FIRST TWO MURDERS WENT UNNOTICED. BUT THE NEXT WAS HER SISTER...
A terrifying yet unputdownable thriller from No. 1 bestselling author and award-winning journalist Jonathan Freedland.

SHE CAN'T SAVE HER SISTER

Journalist Madison Webb is obsessed with exposing lies and corruption. But she never thought she would be investigating her own sister's murder.

SHE CAN'T TRUST THE POLICE

Madison refuses to accept the official line that Abigail's death was an isolated crime. She uncovers evidence that suggests that Abi was the third victim in a series of killings that's been hushed up as part of a major conspiracy.

SHE CAN EXPOSE THE TRUTH

In a United States that has yielded to the People's Republic of China, corruption is rife - the government dictates what the `truth' is. With her life on the line, Madison must give up the story, or face the consequences...

`An intelligent, finely crafted mystery that brilliantly channels the anxieties of our time' New York Times

`A fast-paced political thriller with a murder mystery at its heart that keeps the reader gripped and rooting for the smart female lead throughout. Freedland's best novel to date.' Express

Freedland has a knack of keeping the reader gripped. The twists when they come - and boy do they come - are genuinely surprising' Independent

`Nobody does the high-IQ, high-octane thriller better than Jonathan Freedland' Tony Parsons

`Boldly imaginative ... a magnetic heroine in a heart-racing story' A D Miller, author of Snowdrops

Jonathan Freedland is an award-winning journalist, author and broadcaster. He is the Guardian's executive editor for Opinion, overseeing Comment is free, editorials and long reads. He also writes a weekly column. He is a regular contributor to the New York Times and the New York Review of Books, and presents BBC Radio 4's contemporary history series, The Long View. In 2014 he was awarded the Orwell special prize for journalism, having been named columnist of the year in the 2002 What the Papers Say awards.
Since 2006 he has published five best-selling novels under the pseudonym Sam Bourne. The first, The Righteous Men, was a Sunday Times No. 1 bestseller, and has been translated into 30 languages. His subsequent novels have all been top five bestsellers.
Jonathan was educated at Wadham College, Oxford - where he studied Philosophy, Politics and Economics (PPE) and edited the university newspaper, Cherwell - and, earlier, at University College School, London. He lives in London with his wife and their two children.

GOR007228648
The 3rd Woman by Jonathan Freedland
Jonathan Freedland
Used - Very Good
Paperback
HarperCollins Publishers
2016-01-25
464
0007413696
9780007413690
N/A
Book picture is for illustrative purposes only, actual binding, cover or edition may vary.
This is a used book - there is no escaping the fact it has been read by someone else and it will show signs of wear and previous use. Overall we expect it to be in very good condition, but if you are not entirely satisfied please get in touch with us.