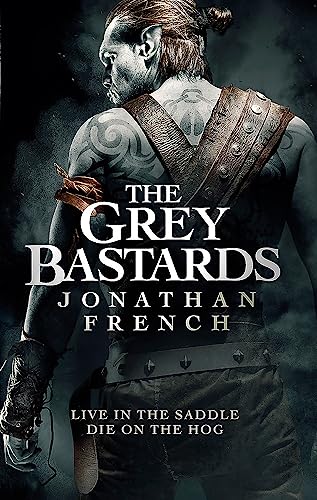 The Grey Bastards
by Jonathan French

The Grey Bastards by Jonathan French

Jackal is proud to be a Grey Bastard, member of a sworn brotherhood of half-orcs. Unloved and unwanted in civilized society, the Bastards eke out a hard life in the desolate no-man's-land called the Lots, protecting frail and noble human civilization from invading bands of vicious full-blooded orcs.

But as Jackal is soon to learn, his pride may be misplaced. Because a dark secret lies at the heart of the Bastards' existence - one that reveals a horrifying truth behind humanity's tenuous peace with the orcs, and exposes a grave danger on the horizon.

On the heels of the ultimate betrayal, Jackal must scramble to stop a devastating invasion - even as he wonders where his true loyalties lie.

'A gritty adventure with a fantastic, foul-mouthed voice . . . Fans of Abercrombie's The First Law . . . will like this a lot' Django Wexler

'Jonathan French has to be lauded for his plot ingenuity, bawdry charm and vicious characters. The Grey Bastards has instantaneously catapulted him into my must-read list' Fantasy Book Critic

An addictively readable - and undeniably cool - fantasy masterwork * Kirkus *
A filthy, charismatic and frankly excellent read -- Mark Lawrence
A gritty adventure with a fantastic, foul-mouthed voice and filthy, lovable characters in a wonderfully original world of half-orcs on giant hogs. Fans of Abercrombie's First Law or the soldierly banter of Erikson's Malazan Book of the Fallen will like this a lot -- Django Wexler
Jonathan French has to be lauded for his plot ingenuity, bawdry charm and vicious characters. The Grey Bastards has instantaneously catapulted him into my must-read list * Fantasy Book Critic *
French has composed a stunning opening chapter to his trilogy that is well worthy of the hype that has been garnering. If you have been living under a rock and haven't heard about this book yet then I'd definitely recommend putting it on your radar * Fantasy Book Review *
The Grey Bastards dragged me in immediately. A bloody good tale of battles, intrigue, betrayal, duty and frickin' war pigs * Brian McClellan *

Saddle up the war boar and set off on a wild, gory thrill-ride that ends in an
awesome climax and begs for a sequel

* Daily Mail *
French flips the fantasy script as the monsters become the good guys, fueling an action-packed, sneakily smart adventure. Half-orc and all badass, Jackal is a hero you won't soon forget * Scott Sigler, New York Times bestselling author of Alive and Infected *
I'd like to raise a tankard to The Grey Bastards' brilliance * Fantasy Faction *
The Grey Bastards is a book that I just absolutely fell in love with . . . Because of this author's unique vision and his incredible talent, this one left a mark on me. I want more * Bookworm Blues *
A funny thing happens when reading The Grey Bastards. You're rolling along, smiling at the novelties on display, but then, almost without warning, you find yourself truly in the world French has created, and it all becomes wonderfully familiar and convincing. The world-building creates exactly the kind of seamless transition that makes fantasy literature compelling, informative, and just plain fun * R.A. Salvatore, New York Times bestselling author *
Terrific and highly original . . . This is excellent fantasy fare on all levels * Publishers Weekly *
This is a filthy book, but it is a damn good one * Pornokitsch *
It's a wild ride on the hog, filled with brutality, battle, and bravery. It's coarse and crass and also loveable, and after this, I have high hopes for what French might do in the future * Biblitropic *
The ugly secrets, betrayals, and twists in this book keep the pages turning as Jackal and his friends discover and fight back against the dark magics and conspiracies involved * Booklist *
I f*cking loved this book. The Grey Bastards went down like a shot of good top-shelf tequila: warm and smooth, but with one hell of a spicy kick * Bibliosanctum *
French is one of a new and exciting stock of writers like Ed McDonald and Nicholas Eames who have invigorated the fantasy genre by doing the impossible: combining the crushing weight of grimdark with a vibrant humour that breathes life into the pages. The Grey Bastards is a huge success * The Fantasy Hive *

Jonathan French resides in Atlanta with his wife, son, and cat. He is a devoted reader of comic books, an expert thrower of oddly-shaped dice and a serial con attendee.

GOR009230185
The Grey Bastards by Jonathan French
Jonathan French
The Lot Lands
Used - Very Good
Paperback
Little, Brown Book Group
2018-06-21
464
0356511642
9780356511641
N/A
Book picture is for illustrative purposes only, actual binding, cover or edition may vary.
This is a used book - there is no escaping the fact it has been read by someone else and it will show signs of wear and previous use. Overall we expect it to be in very good condition, but if you are not entirely satisfied please get in touch with us.