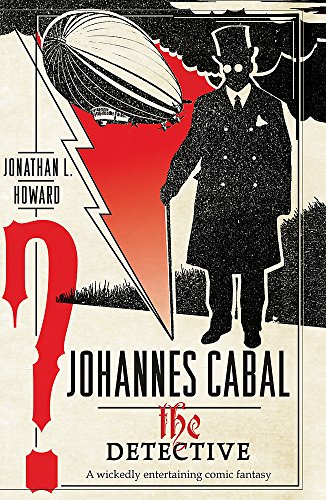 Used Price
Free Shipping in the UK
The second novel in this fantastic new series, a must for fans of Terry Pratchett and Tim Burton
Reviews:
Trustpilot
Very Good

Johannes Cabal is back - a little older, a little wiser, but just as sharply funny, cuttingly sarcastic, and unexpectedly violent as ever.

For necromancer Johannes Cabal, dealing with devils, demons and raising the dead is pretty much par for the course. But when his attempt to steal a rare book turns sour, he is faced by a far more terrifying entity - politics. While awaiting execution for his crime, Cabal is forced to resurrect an inconveniently deceased emperor. Seizing his chance, the cunning Cabal engineers his escape, fleeing the country on a state-of-the-art flying ship. But the ship has more than a few unpleasant surprises, including an unwelcome face from the past and the small matter of some mysterious murders. Cabal may work with corpses but he has absolutely no intention of becoming one. Drawn into a deadly conspiracy, is he shuffling dangerously close to the end of his mortal coil?

"A swashbuckling mystery set in a steampunk world."--"Denver Post" "Cabal, the detective and necromancer, is full of charismatic amorality, making him both a classical, and refreshing antihero."--"TimeOut", Chicago "Definitely entertaining, a cut above many books out there."--"Free Lance-Star" "Silly, erudite, and part a playful modern variant of the locked door murder mystery."--"The Huffington Post"

Jonathan L. Howard is a game designer, scriptwriter, and a veteran of the computer games industry since the early 'nineties with titles such as the 'Broken Sword' series to his credit. He lives in the United Kingdom with his wife and daughter.

GOR002666163
Johannes Cabal the Detective by Jonathan L. Howard
Jonathan L. Howard
Used - Very Good
Paperback
Headline Publishing Group
2011-02-03
416
0755347978
9780755347971
N/A
Book picture is for illustrative purposes only, actual binding, cover or edition may vary.
This is a used book - there is no escaping the fact it has been read by someone else and it will show signs of wear and previous use. Overall we expect it to be in very good condition, but if you are not entirely satisfied please get in touch with us.