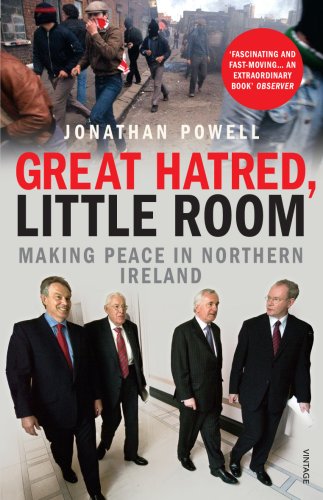 Out of Stock
£4.49
Making peace in Northern Ireland was the greatest success of the Blair government, and one of the greatest achievements in British politics since the Second World War.
Like New
Only 0 left

Making peace in Northern Ireland was the greatest success of the Blair government, and one of the greatest achievements in British politics since the Second World War. In Jonathan Powell's masterly account we learn just how close the talks leading to the Good Friday agreement came to collapse and how the parties finally reached a deal. Pithy, outspoken and precise, Powell, Tony Blair's chief of staff and chief negotiator, gives us that rarest of things, a true insider's account of politics at the highest level. He demonstrates how the events in Northern Ireland have valuable lessons for those seeking to end conflict in other parts of the world and shows us how the process of making peace is sometimes messy and often blackly comic.

"Fascinating and fast-moving... an extraordinary book" * Observer *
"A powerful contribution to the history of Anglo-Irish relations" * Literary Review *
"A fascinating book. No-one else could provide such an insider's account, for he was the only one to be involved in the detail of every tortuous step" * Sunday Telegraph *
"Jonathan Powell has produced one of the half-dozen best books on the Troubles... He was the ultimate insider... Powell writes in a personal manner, with deft character sketches" * Independent *
"This is the best-informed rough draft of history so far written by someone who was on the roller-coaster ride to a settlement" * The Times *

After studying history at Oxford and the University of Pennsylvania, Jonathan Powell worked for the BBC and Granada TV before joining the Foreign Office in 1979. In 1994 Mr Blair, then Leader of the Opposition, poached him to join his `kitchen cabinet' as his Chief of Staff. When Labour achieved its landslide victory in 1997 Powell was at the heart of the Downing Street machine. He was the only senior member of staff to remain at Blair's side throughout his time at the top of British politics. He has always maintained a low profile and has never before told his story.

GOR010298326
Great Hatred, Little Room: Making Peace in Northern Ireland by Jonathan Powell
Jonathan Powell
Used - Like New
Paperback
Vintage Publishing
2009-04-02
368
0099523736
9780099523734
N/A
Book picture is for illustrative purposes only, actual binding, cover or edition may vary.
The book has been read, but looks new. The book cover has no visible wear, and the dust jacket is included if applicable. No missing or damaged pages, no tears, possible very minimal creasing, no underlining or highlighting of text, and no writing in the margins.