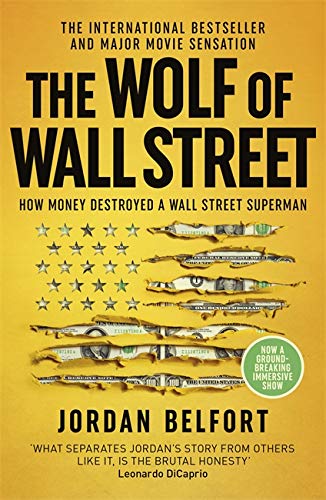 The Wolf of Wall Street
by Jordan Belfort

In Stock
£4.49
Stock market multimillionaire at 26, federal convict at 36, he partied like a rock star, lived like a king, and barely survived his rise and fall as an American entrepreneurial icon.
Very Good Good
5 in stock

The Wolf of Wall Street Summary

The Wolf of Wall Street by Jordan Belfort

'What separates Jordan's story from others like it, is the brutal honesty.' - Leonardo DiCaprio

By day he made thousands of dollars a minute. By night he spent it as fast as he could, on drugs, sex, and international globe-trotting. From the binge that sunk a 170-foot motor yacht, crashed a Gulfstream jet, and ran up a $700,000 hotel tab, to the wife and kids who waited for him for at home, and the fast-talking, hard-partying young stockbrokers who called him king and did his bidding, here, in his own inimitable words, is the story of the ill-fated genius they called...

THE WOLF OF WALL STREET

In the 1990s Jordan Belfort, former kingpin of the notorious investment firm Stratton Oakmont, became one of the most infamous names in American finance: a brilliant, conniving stock-chopper who led his merry mob on a wild ride out of the canyons of Wall Street and into a massive office on Long Island. In this astounding and hilarious tell-all autobiography, Belfort narrates a story of greed, power, and excess no one could invent - the story of an ordinary guy who went from hustling Italian ices at sixteen to making hundreds of millions. Until it all came crashing down.

The Wolf of Wall Street Reviews

What separates Jordan's story from others like it, is the brutal honesty in which he talks about the mistakes that he's made in his life. * Leonardo DiCaprio *
Raw and frequently hilarious. * The New York Times *
Reads like a cross between Tom Wolfe's Bonfire of the Vanities and Scorsese's Goodfellas ... Laugh-out-loud funny. * The Sunday Times *
an incredible - and strangely compelling - story of shocking greed and power. * The Sunday Telegraph *
The wicked Wolf of Wall Street ... Cocaine. Girls. James Bond cars. Billion-dollar deals and jail for fraud ... the outrageous memoirs of the real Gordon Gekko. * The Daily Mail *
This book reads like The Financial World presented by Ozzy Osbourne ... One reads a book like this for tales of excess, and Belfort certainly delivers, to the point where you long for a night in with Dad's Army and something eggy on a plate. * The Mail on Sunday *
A truly fascinating read. * Daily Express *
Gleefully crass and terribly sad [but] you actually feel for the guy. * Rolling Stone *
A rollicking tale of [Jordan Belfort's] rise to riches as head of the infamous boiler room Stratton Oakmont ... Proof that there are indeed second acts in American lives. * Forbes *
A cocky bad boy of finance recalls ... [his] career as a master of his own universe ... A hell of a read. * Kirkus reviews *
A memoir that reads like fiction ... [about a] vast amount of sex, drugs and risky physical behavior Belfort managed to survive. * Publishers Weekly *
For those not completely familiar with Wall Street, this is an important read. Think of it as a tour of the sort of underbelly of the financial market scene, the dark side of which, in some form, is always out there. For those more experienced, this can be, plain and simple, a fun read. * TheStreet.com *

Jordan Belfort was born in Queens, New York. He hustled ices to put himself through college, showing early entrepreneurial flair. His first business sent him bankrupt at twenty-four so he went down to Wall St with $100 in his pocket and ended up building one of the largest brokerages in America - the now infamous Stratton Oakmont. A hard partying lifestyle ended in crash and burn. Ultimately indicted by the federal government, Belfort served twenty-two months in prison, and time in rehab. He's now a highly successful motivational speaker. His story has been made into a Golden Globe-winning and Academy Award-nominated film starring Leonardo DiCaprio and directed by Martin Scorsese. He is currently living in Los Angeles.

GOR001205441
The Wolf of Wall Street by Jordan Belfort
Jordan Belfort
Used - Very Good
Paperback
Hodder & Stoughton General Division
2008-09-04
528
0340953756
9780340953754
N/A
Book picture is for illustrative purposes only, actual binding, cover or edition may vary.
This is a used book - there is no escaping the fact it has been read by someone else and it will show signs of wear and previous use. Overall we expect it to be in very good condition, but if you are not entirely satisfied please get in touch with us.