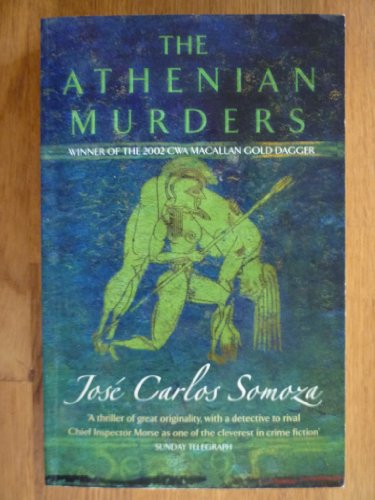 THE ATHENIAN MURDERS is a brilliant, very entertaining and absolutely original literary mystery, revolving round two intertwined riddles. In classical Athens, one of the pupils of Plato's Academy is found dead. His idealistic teacher suspects that this wasn't an accident and asks Herakles, known as the 'Decipherer of Enigmas', to investigate the death and ultimately a dark, irrational and subversive cult. The second plot unfolds in parallel through the footnotes of the translator of the text. As he proceeds with his work, he becomes increasingly convinced that the original author has hidden a second meaning, which can be brought to light by interpreting certain repeated words and images. As the main plot and also the translation of the manuscript advances, there are certain sinister coincidences, and it seems that the text is addressing him personally and in an increasingly menacing manner... THE ATHENIAN MURDERS constitutes a highly compelling, entertaining and intelligent game about the different ways we can see and read reality, about our refusal to take things 'as they are' and our need to interpret hidden meanings into everyday life.

A delightfully paranoic read on both ancient and modern planes with enough literary cunning to satisfy fans of Nabokov's PALE FIRE as well as THE NAME OF THE ROSE * INDEPENDENT *
Extremely subtle and intelligent...totally absorbing * EVENING STANDARD *
It works, superbly * INDEPENDENT ON SUNDAY *
This is both a riveting historical novel and a subtle, unpretentious investigation of what happens when writers write and readers read. * SUNDAY TIMES *

Born in Habana in 1959 Somoza is a qalified psychiatrist but has been writing full-time since 1994. His many awards inc. the Cervantes Theatre Prize & the Cafe Gijon Prize & his novel DAFNE DESVANECIDA was shortlisted for 1 of Spain's most prestigious awards- the Nadal Prize.

GOR003292320
The Athenian Murders by Jose Carlos Somoza
Jose Carlos Somoza
Used - Very Good
Paperback
Little, Brown Book Group
2002-12-05
320
B002C083Y6
9780349116181
Winner of CWA Gold Dagger for Fiction 2002 (UK) Winner of CWA Gold Dagger for Fiction 2002 (UK)
Book picture is for illustrative purposes only, actual binding, cover or edition may vary.
This is a used book - there is no escaping the fact it has been read by someone else and it will show signs of wear and previous use. Overall we expect it to be in very good condition, but if you are not entirely satisfied please get in touch with us.