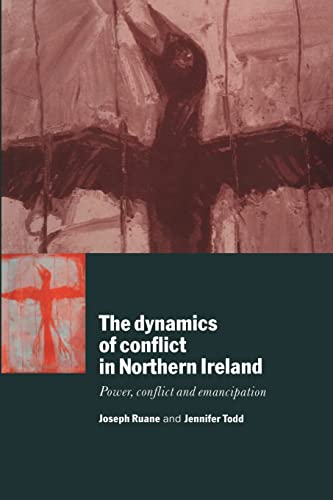 In Stock
£17.99
The authors provide a comprehensive and original interpretation of the Northern Ireland conflict. It situates the conflict firmly in its Irish, British and wider international contexts, showing how the sharp conflicts of interest are generated by deep-set structures and relations within Britain and Ireland.
Very Good
Only 2 left

The Dynamics of Conflict in Northern Ireland Summary

This book offers a uniquely comprehensive account of the conflict in Northern Ireland, providing a rigorous analysis of its dynamics and present structure and proposing a new approach to its resolution. It deals with historical process, communal relations, ideology, politics, economics and culture and with the wider British, Irish and international contexts. It reveals at once the enormous complexity of the conflict and shows how it is generated by a particular system of relationships which can be precisely and clearly described. The book proposes an emancipatory approach to the resolution of the conflict, conceived as the dismantling of this system of relationships. Although radical, this approach is already implicit in the converging understandings of the British and Irish governments of the causes of conflict. The authors argue that only much more determined pursuit of an emancipatory approach will allow an agreed political settlement to emerge.

The Dynamics of Conflict in Northern Ireland Reviews

'One of the most impressive works on the Northern Ireland conflict which I have read in many years. It has the magisterial quality of J. J. Lee's Ireland 1912-1985: Politics and Society, or John Whyte's Interpreting Northern Ireland. It is an amazingly comprehensive and coherent manuscript, which draws on many disciplines - history, economics, politics and anthropology - to provide a rich and complex synthesis.' Paul Arthur, University of Ulster, Jordanstown
'This is an incisive yet fair-minded study. Drawing scrupulously on a very wide range of sources, the authors survey the arguments and come up with their own interesting suggestions. One of the best recent treatments of the Ulster problem.' Paul Bew, Queen's University, Belfast
'In seeking to explain the Northern Ireland conflict, the authors have taken on an exceptionally ambitious task. They have carried it out with considerable skill and ability.' Irish Independent
'They reap a rich harvest of insight and argument from the formidably large corpus of research now available; but they tie these together by a set of strong conceptual cords - power, dominance, equality.' W. Harvey Cox, Irish Political Studies
"The bulk of their book is an exhaustive analysis of the causes of the present conflict, and it is full of insights; they draw as well on the intimidating body of literature the conflict has spawned." Washington Times
"The Dynamics of Conflict in Northern Ireland is essential reading for those seeking to understand both the specific problems of Northern Ireland and the general character of interethnic conflict. The footnotes and bibliography alone are an invaluable guide to contemporary approaches. The authors, from contrasting backgrounds, provide a lucid, up-to-date and well-informed analysis of the historical, political, economic and cultural dimensions of the problem. They discuss the European and American connection as well as the more immediate British and Irish context. Their suggestions for an 'emancipatory approach' may well indicate the most practicable strategy for a possible solution. All in all, this book is an invaluable and illuminating analysis of an extraordinarily intricate and intractable problem." Professor Hugh Kearney, University of Pittsburgh

GOR003639746
The Dynamics of Conflict in Northern Ireland: Power, Conflict and Emancipation by Joseph Ruane (University College Cork)
Joseph Ruane (University College Cork)
Used - Very Good
Paperback
Cambridge University Press
1996-11-13
384
052156879X
9780521568791
N/A
Book picture is for illustrative purposes only, actual binding, cover or edition may vary.
This is a used book - there is no escaping the fact it has been read by someone else and it will show signs of wear and previous use. Overall we expect it to be in very good condition, but if you are not entirely satisfied please get in touch with us.