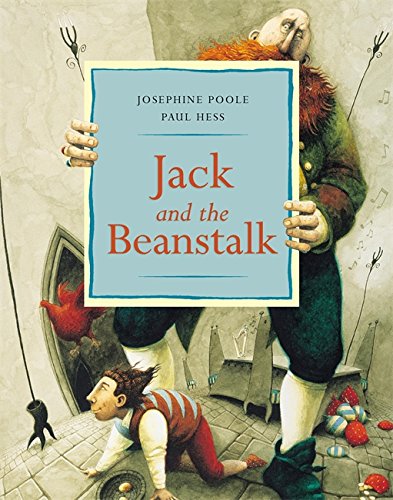 Jack And The Beanstalk
by Josephine Poole

In Stock
£5.99
This traditional tale of Jack and the giant at the top of the beanstalk is retold by highly-acclaimed fiction author, Josephine Poole and complemented by wonderful artwork from Paul Hess.
Very Good Good Well Read
Only 4 left

Jack And The Beanstalk Summary

Jack And The Beanstalk by Josephine Poole

One day, Jack's mother asks him to sell the cow at market to earn some money. But Jack ends up swapping the cow, not for lots of gold pieces, but for a handful of magic beans. What happens when the beans grow into a giant beanstalk?

Jack And The Beanstalk Reviews

Praise for 'Moon Eyes'
'Josephine Poole ... is expert at building up tension from small details and creating menace ... This sensitivity to the characters' own uncertainties enhances the mysteries ... but it is also what gives the books an atmosphere which is remembered long after the plot is forgotten.' - Twentieth Century Children's Writers
'sinister power is compellingly conveyed.' - The Guardian
'There is a real study of the nature of good and evil underlying the story ... a good book as well as a most unusual one.' - TLS

Josephine Poole is a widely published and highly acclaimed writer whose work includes poetry, plays, TV dramas, wildlife stories, retellings of classic stories, thrillers and teenage novels. Romance, suspense and the supernatural are her favourite themes. Her novel CATCH AS CATCH CAN was made into a television series. SNOW WHITE, illustrated by Angela Barrett, was shortlisted for the Smarities Prize in 1991. Josephine lives with her husband in the country in a very old house large enough for their six children and five grandchildren - should they visit together - and a horse, a pony, a donkey, three dogs, two cats, several guinea pigs and a goldfish. Paul Hess studied graphic deisgn before going on to work as an art director in various design studios. Paul began illustrating full-time in 1991 and has illustrated several children's books. He won the Association of Illustrators Award for Best Unpublished Illustration in 1992 and won the Sydney Morning Herald Award for Best Portrait in a Photographic Competition in 1978.

GOR001110020
Jack And The Beanstalk by Josephine Poole
Josephine Poole
Used - Very Good
Paperback
Hachette Children's Group
2004-01-15
32
0340877847
9780340877845
N/A
Book picture is for illustrative purposes only, actual binding, cover or edition may vary.
This is a used book - there is no escaping the fact it has been read by someone else and it will show signs of wear and previous use. Overall we expect it to be in very good condition, but if you are not entirely satisfied please get in touch with us.