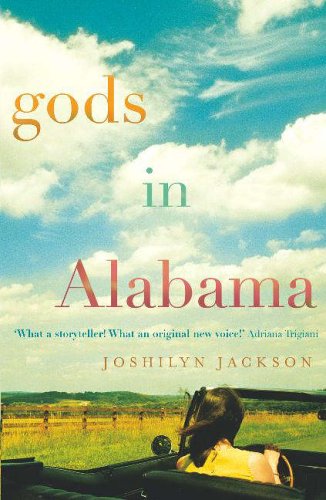 Gods In Alabama
by Joshilyn Jackson

In Stock
£3.99
'What a storyteller! What an original new voice!' Adriana Trigiani
Very Good
6 in stock

When Lena Fleet goes to college, she makes three promises to God: she will stop fornicating with every boy she meets; never tell another lie and never, ever go back to her hometown of Possett, Alabama. All she wants from God in return is that He makes sure the body is never found...

But ten years later, it looks like God's going back on His deal. Lena's high school archenemy appears on her doorstep, looking for the golden haired football god who disappeared during their senior year. To make matters worse, her African American boyfriend has issued her with an ultimatum - introduce him to her lily-white family or he's gone...

While she would rather burn in a fire than let him meet her steel magnolia Aunt Florence, her half-mad Mama, her sweet-as-pecan-pie cousin Clarice and the rest of her eccentric and racist family, Lena realises it is time to go home to Alabama and confront the past once and for all...

'Joshilyn Jackson's stellar debut has all the elements of great southern fiction, a plucky heroine with a sense of humour, a gripping tale and a mysterious dead body that needs explanation. Arlene Fleet, with a crystal clear voice and purpose takes the reader on a wild ride of despair, hope and redemption that no reader is likely to ever forget. What a storyteller! What a new, original voice!'
Adriana Trigiani, author of Lucia, Lucia

Now there's a new Southern talent and Jackson's debut is a startling page turner... This is a beautifully crafted, sassy novel, where nothing is quite as it seems, and the way the final pieces of the jigsaw slot together... should surprise even the most jaded of readers. * Glamour *

'This winning novel is the kind that readers crave: you can't stop turning the pages, but you wish it would never end. If Gods in Alabama becomes a best-seller, I won't be a bit surprised'
Christina Schwarz, author of Drowning Ruth

If you're looking for a lively, fun, yet compelling read, you've come to the right place! * Cassandra King, author of The Sunday Wife *
I couldn't put this book down. From the first chapter, the plot leaps forward, and it doesn't stop twisting and turning until the last page . . . Funky and cool * Melanie Sumner, author of The School of Beauty *
GODS IN ALABAMA is a compelling, darkly humorous read that kept me turning the pages * Haywood Smith, author of The Red Hats Ride Agai *

Joshilyn Jackson was born and grew up in the Deep South. A former actress and award-winning teacher, she is now a full-time writer. Joshilyn lives in Atlanta, Georgia with her husband and their two children, and is currently writing her second novel. You can visit her website at www.joshilynjackson.com.

GOR001398703
Gods In Alabama: 'Dark, moving and very addictive' (Heat) by Joshilyn Jackson
Joshilyn Jackson
Used - Very Good
Paperback
Hodder & Stoughton General Division
2005-08-15
288
034089668X
9780340896686
N/A
Book picture is for illustrative purposes only, actual binding, cover or edition may vary.
This is a used book - there is no escaping the fact it has been read by someone else and it will show signs of wear and previous use. Overall we expect it to be in very good condition, but if you are not entirely satisfied please get in touch with us.