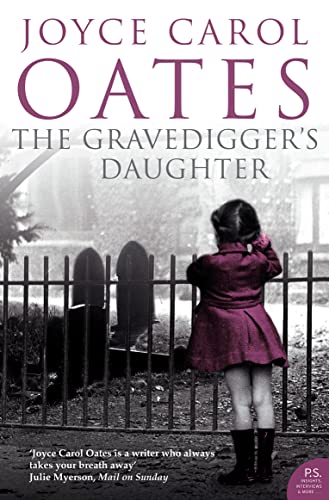 From the author of `Blonde', `The Falls' and `We Were the Mulvaneys', this new novel takes in the themes of race, immigration, family and social mobility, and is Joyce Carol Oates at her storytelling best.

From the author of `Blonde', `The Falls' and `We Were the Mulvaneys', this new novel takes in the themes of race, immigration, family and social mobility, and is Joyce Carol Oates at her storytelling best.

`The Gravedigger's Daughter' tells the tale of Rebecca Schwart, born in the late 1930s to an immigrant family from Nazi Germany, just as they are arriving to America. The family settles in a small, bleak town in upstate New York, where the only job the father can get is as the town gravedigger and caretaker of the cemetery. Soon the town's prejudice and the family's own emotional frailty results in unspeakable tragedy. In the wake of this loss, and in an attempt to put her past behind her, young Rebecca Schwart moves on, across America and through a series of listless marriages, in search of somewhere, and someone, to whom she can belong.

'A distinctive addition to her extraordinary cannon, at once sinuous and jarring, stark and subtle - the literary equivalent of a warm slap in the face.' The Observer

`Every single Oates novel I've read has added to my conviction that she is a genius.' Julie Myerson, Independent on Sunday

`One of the female frontrunners for the title of Great American Novelist.' Maggie Gee, Sunday Times

'A writer of extraordinary strengths...she has dealt consistently with what is probably the great American theme - the quest for the creation of self...Her great subject, naturally, is love.' Ian Sansom, Guardian

`Unlike anything else she has ever written...A very strong and readable novel; the rivalry between the two sisters is especially well observed.' Edmund White, Books of the Year, Times Literary Supplement

'Her prose is peerless and her ability to make you think as she re-invents genres is unique. Few writers move so effortlessly from the gothic tale to the psychological thriller to the epic family saga to the lyrical novella. Even fewer authors can so compellingly and entertainingly tell a story.' Jackie McGlone, Scotland on Sunday

Joyce Carol Oates is a recipient of the National Book Award and the PEN/Malamud Award for Excellence in Short Fiction. She has written some of the most enduring fiction of our time, including `We Were the Mulvaneys', which was an Oprah Book Club Choice, and `Blonde', which was nominated for the National Book Award. She is the Roger S. Berlind Distinguished Professor of Humanities at Princeton University.

GOR001189186
The Gravedigger's Daughter by Joyce Carol Oates
Joyce Carol Oates
Used - Very Good
Paperback
HarperCollins Publishers
2008-05-05
600
0007258461
9780007258468
Short-listed for National Book Critics Circle Awards: Fiction 2008
Book picture is for illustrative purposes only, actual binding, cover or edition may vary.
This is a used book - there is no escaping the fact it has been read by someone else and it will show signs of wear and previous use. Overall we expect it to be in very good condition, but if you are not entirely satisfied please get in touch with us.