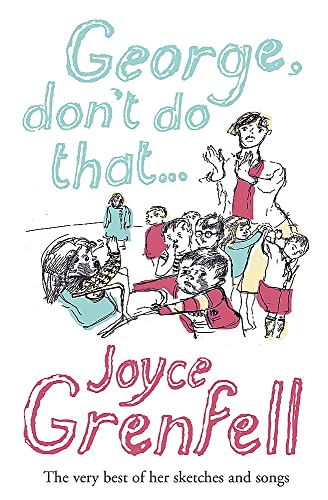 Brilliantly observed, funny, bittersweet, Joyce Grenfell's witty sketches and songs never fail to entertain. This edition contains all the material in the original volumes of George, Don't Do That and Stately as a Galleon, including the bloodthirsty 'Ethel' and the unforgettable nursery school monologues.

Each one a highly individualistic character-study, not in the least resembling any other figure in the cavalcade. A series of perfect miniatures, etched in exquisite detail. * Theatre World *
She had no image to preserve, no axe to grind, no future management to impress. This total lack of "angst" came across the footlights and engendered an atmosphere of extraordinary trust and love, so that audiences under her spell felt safe and cozy and somehow cherished. * Virginia Graham *
'Very funny . . . Grenfell was one of the finest humorous writers and performers of the 20th century.' * Independent on Sunday *

Joyce Grenfell's girlhood was spent on the fringes of the famous Cliveden that included George Bernard Shaw and Noel Coward but it was only in 1938 that she gave an impromptu imitation of a Women's Institute speaker and discovered her genius for dramatic monologue. She was an accomplished actress and starred in many well known films, including the St Trinian's series. She was also a regular to television, radio and the stage, and entertained troops during the war with her usual wit, charm and humour. She died in 1979.

GOR001194127
George, Don't Do That . . . by Joyce Grenfell
Joyce Grenfell
Used - Very Good
Paperback
Hodder & Stoughton General Division
2006-06-29
208
034089637X
9780340896372
N/A
Book picture is for illustrative purposes only, actual binding, cover or edition may vary.
This is a used book - there is no escaping the fact it has been read by someone else and it will show signs of wear and previous use. Overall we expect it to be in very good condition, but if you are not entirely satisfied please get in touch with us.