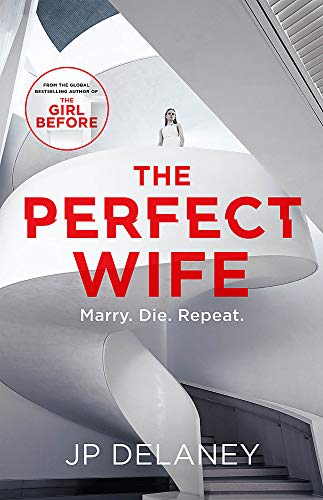 The Perfect Wife
by JP Delaney

The Perfect Wife by JP Delaney

'A chilling and uniquely disturbing 21st-century twist on the unreliable narrator makes for a compulsive and deeply thought-provoking psychological thriller'
Cara Hunter, author of Close to Home

"There's something I have to explain, my love," he says, taking your hand in his. "That wasn't a dream. It was an upload."

Abbie wakes in a hospital bed with no memory of how she got there. The man by her side explains that he's her husband. He's a titan of the tech world, the founder of one of Silicon Valley's most innovative startups. He tells Abbie she's a gifted artist, a doting mother to their young son, and the perfect wife.

Five years ago, she suffered a terrible accident. Her return from the abyss is a miracle of science, a breakthrough in artificial intelligence that has taken him half a decade to achieve.

But as Abbie pieces together memories of her marriage, she begins questioning her husband's motives - and his version of events. Can she trust him when he says he wants them to be together for ever? And what really happened to her, half a decade ago?

A gripping psychological thriller, perfect for fans of The Woman in the Window and The Wife Between Us.

See what everyone is saying about JP Delaney, the hottest name in psychological thrillers:

One of the most ingenious books you'll read this year... A thrilling examination of what it is to be human * Daily Mail *
First-rate psychological suspense * Observer *
The kind of novel words like 'unputdownable' were invented for . . . Delaney pulls it off brilliantly, with an intoxicating knack for suspense . . . captivating, deeply engrossing * Independent *
The narrative complexity, characterisation and gradual unravelling of the truth is a triumph of pacing and suspense * Woman & Home *
Seriously, amazingly, awesomely brilliant * CJ Tudor, author of The Chalk Man *
The twists are primed and deployed with a master craftsman's skill * Sunday Express *
A tour-de-force. A chilling and uniquely disturbing 21st-century twist on the unreliable narrator makes for a compulsive and deeply thought-provoking psychological thriller * Cara Hunter, author of Close to Home *
A completely original psychological thriller that grabs you and doesn't let go * Karen Cleveland, author of Need to Know *

Scarily believable and utterly thought-provoking. I genuinely feared for Abbie and couldn't figure out who to trust in this unputdownable thriller

* Karen Hamilton, author of The Perfect Girlfriend *
Dynamic, razor-sharp and thought-provoking . . . The Perfect Wife is a cutting-edge suspense novel unlike any you've read before. A must read! * Mary Kubica, author of The Good Girl *
This is going to be the buzziest book of 2017 . . . This year The Girl Before will be that book * InStyle *
I was instantly gripped and held captivated by the pace and elegant writing. I devoured it in two straight sittings * Peter James *
Dazzling - a pitch-perfect thriller * Lee Child *
Riveting! One of the most compelling page-turners I've read in years. Twisty, turny, and with an ending not to be missed! * Lisa Gardner *
The tension is built up subtly, leading to a devastating climax. A really clever thriller . . . [the film] will no doubt become the third big 'Girl' film * Daily Mail *
Slick, sexy, suspenseful and smart * Mail on Sunday *
Original and entertaining * The Times *
A deeply addictive literary thriller that deserves to be one of this year's biggest successes * Daily Express *
Get hooked on this hair-raiser about a woman who scores what seems like her dream home . . . until she finds out the mysterious fate of the previous tenant * Cosmopolitan *
Creepy . . . The buzz around this could not be fizzier * Heat *
The Girl Before is deservedly anointed the 'top girl' of this season's suspense novels * The Washington Post *
A compulsive, sexy thriller that's set to soar * Glamour Magazine Online *
Constantly cranking up the suspense . . . a thoroughly satisfying read * Reader's Digest *
Enthralling * Woman and Home *
A guaranteed best-seller * Red Magazine *
The most intriguing plot idea I've seen in a good while * The Spectator *
Genuinely eerie . . . beautifully handled . . . the pages fly * USA Today *
Riveting . . . Writing with precision and grace, Delaney strips away the characters' secrets until the raw truth of each is revealed * Publishers Weekly *
A guaranteed best-seller * Prima *
Original and brilliantly written * The Sun *
JP Delaney builds the suspense * Vanity Fair *
Ingenious * The New York Times *
The plotting is exceptionally well thought-through * Irish Independent *
A masterfully crafted spellbinder . . . guaranteed to astonish * Booklist *
A crisp psychological thriller * Sainsbury's Magazine *
The Girl Before is more than worthy of the accolades . . . a complex triangle of twisted obsession . . . say goodbye to your nails * Boundless Magazine *
A great thriller and one that instantly hooks you in, in the very first line, and never lets you go . . . utterly compelling and very satisfying . . . A wonderful portrayal of psychological obsession at its creepy best * Peter James for Big Issue North *
The Girl Before is a cat-and-mouse game that toys with our expectations and twists our sympathies. At times almost unbearably suspenseful, it keeps us guessing from the first page to the very last. Don't miss it * Joseph Finder *
One of the best thrillers you'll read in 2017 * New York Journal of Books *
Compulsively readable . . . The highly unusual setup sets this one above the thriller pack * Publishers Weekly *
An intriguing novel of ideas . . . plays with its themes (from AI and art to autism) just as absorbingly as recent literary fiction withsimilar preoccupations * Sunday Times *

THE PERFECT WIFE is the third psychological thriller from JP Delaney, a pseudonym for a writer who has previously written bestselling fiction under other names. JP Delaney's first thriller THE GIRL BEFORE became a global bestseller published in forty-one countries.

GOR009966351
The Perfect Wife by JP Delaney
JP Delaney
Used - Very Good
Hardback
Quercus Publishing
2019-08-08
448
1786488523
9781786488527
N/A
Book picture is for illustrative purposes only, actual binding, cover or edition may vary.
This is a used book - there is no escaping the fact it has been read by someone else and it will show signs of wear and previous use. Overall we expect it to be in very good condition, but if you are not entirely satisfied please get in touch with us.