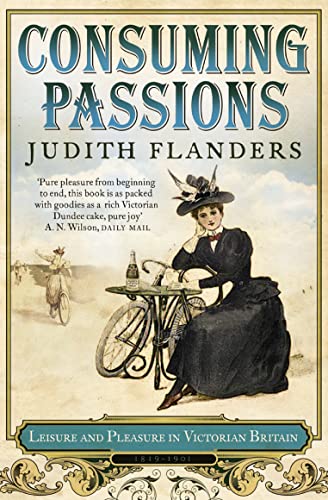 A delightful and fascinating social history of Victorians at leisure, told through the letters, diaries, journals and novels of nineteenth-century men and women, from the author of the bestselling `The Victorian House'.

A delightful and fascinating social history of Victorians at leisure, told through the letters, diaries, journals and novels of nineteenth-century men and women, from the author of the bestselling `The Victorian House'.

Imagine a world where only one in five people owns a book, where just one in ten has a knife or a fork - a world where five people out of every six do not own a cup to hold a hot drink. That was what England was like in the early eighteenth century. Yet by the close of the nineteenth century, the Industrial Revolution had brought with it not just factories, railways, mines and machines but also fashion, travel, leisure and pleasure.

Leisure became an industry - a cornucopia of excitement for the masses - and it was spread by newspapers, advertising, promotions and publicity - all of which were eighteenth-century creations. It was Josiah Wedgwood and his colleagues who invented money-back guarantees, free delivery and celebrity endorsements. New technology such as the railways brought audiences to ever-more-elaborate extravaganzas, whether it was theatrical spectaculars with breathtaking pyrotechnics and hundreds of extras - `hippodramas' recreating the battle of Waterloo - or the Great Exhibition itself, proudly displaying 'the products of all quarters of the globe' under twenty-two acres of the sparkling 'Crystal Palace'.

In `Consuming Passions', the bestselling author of `The Victorian House' explores this dramatic revolution in science, technology and industry - and how a world of thrilling sensation, lavish spectacle and unimaginable theatricality was born.

`Her account of how the Victorian age democratised pleasure and ordinary convenience should become a classic.' Independent on Sunday

`Flanders's book is suitably fat and fact-packed...this is a generous survey of a world that is both far stranger and far more familiar than the one we think we know.' Daily Telegraph

`"Consuming Passions" tells the story of Victorian leisure and pleasure as an interrelated and intricate set of transformations...a fascinating, bewildering, marvel-crammed quest.' Guardian

`It is a world explored with much wit and insight...Flanders is excellent...It's a rich mix [and]...fluently written...It has every chance of becoming a bestseller.' Sunday Telegraph

`...her book, which is about the ways our forebears enjoyed themselves, is itself pure pleasure from beginning to end... [Flanders] is encyclopaedic in her range...This book is packed with goodies as a rich Victorian Dundee cake. Seldom has painstaking academic research been put to better use to produce a work which is pure joy. Every page crammed with interest.' Daily Mail

`A richly detailed work that translates a wealth of research with a light and readable touch.' Guardian

'Full of fascinating nuggets, this book puts our modern obsession with buying stuff firmly into context. Reverting and revealing.' Time Out

Judith Flanders is the author of critically acclaimed `A Circle of Sisters' (2001) - a biography of Alice Kipling, Georgiana Burne-Jones, Agnes Poynder and Louisa Baldwin - which was nominated for the Guardian First Book Award, and the bestselling `The Victorian House - Domestic Life from Childbirth to Deathbed' (2003). She is a frequent contributor to the `Daily Telegraph', the `Guardian', the `Evening Standard', and the `Times Literary Supplement'. She lives in London.

GOR001190797
Consuming Passions: Leisure and Pleasure in Victorian Britain by Judith Flanders
Judith Flanders
Used - Very Good
Paperback
HarperCollins Publishers
2007-10-01
400
0007172966
9780007172962
N/A
Book picture is for illustrative purposes only, actual binding, cover or edition may vary.
This is a used book - there is no escaping the fact it has been read by someone else and it will show signs of wear and previous use. Overall we expect it to be in very good condition, but if you are not entirely satisfied please get in touch with us.