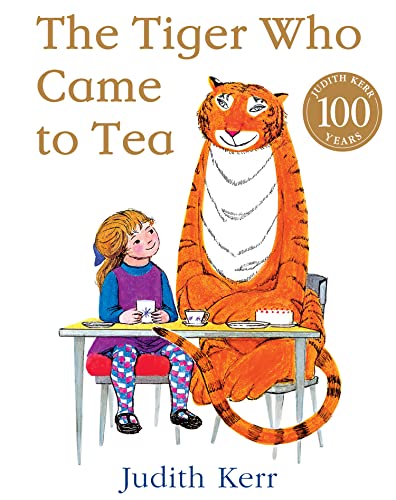 The Tiger Who Came to Tea
by Judith Kerr

This classic story of Sophie and her extraordinary teatime guest has been loved by millions of children since it was first published more than fifty years ago.

The Tiger Who Came to Tea Summary

The Tiger Who Came to Tea by Judith Kerr

This classic story of Sophie and her extraordinary teatime guest has been loved by millions of children since it was first published more than fifty years ago.

The doorbell rings just as Sophie and her mummy are sitting down to tea. Who could it possibly be? What they certainly don't expect to see at the door is a big furry, stripy tiger!

This inimitable picture book is perfect for reading aloud, or for small children to read to themselves time and again. First published in 1968 and never out of print, it has become a timeless classic enjoyed and beloved by generations of children.
The magic begins at teatime!

The Tiger Who Came to Tea Reviews

'A modern classic.' The Independent.

'This book has enduring charm and young children will delight in the preposterous notion of a tiger creating mayhem in the house.' Junior Magazine

Praise for 'Mog the Forgetful Cat':

'Grandparents are likely to get as much fun out of seeing it again as the new generation of fans just learning to read!' Choice Magazine

'Kerr's warmth, humour and honesty make this an engaging introduction to a difficult topic.' Financial Times

'A supremely sensitive story.' The Times

Praise for 'One Night in the Zoo':

GOR001251897
The Tiger Who Came to Tea by Judith Kerr
Judith Kerr
Used - Very Good
Paperback
HarperCollins Publishers
2006-02-06
32
0007215991
9780007215997
N/A
Book picture is for illustrative purposes only, actual binding, cover or edition may vary.
This is a used book - there is no escaping the fact it has been read by someone else and it will show signs of wear and previous use. Overall we expect it to be in very good condition, but if you are not entirely satisfied please get in touch with us.