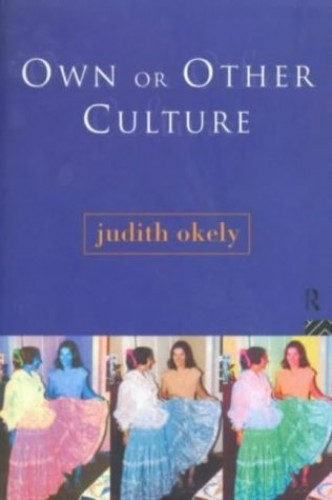 Own or Other Culture
by Judith Okely

In Stock
£2.69
The view that fieldwork in the "West" is easy or merely a reiteration of what is already "known" is challenged in this text, which contains articles on a wide range of subjects from Gypsies to British boarding schools and feminism.
Good
Only 1 left

Own or Other Culture Summary

Own or Other Culture by Judith Okely

Own or Other Culture challenges those anthropologists who suggest that fieldwork in the 'West' is easy or merely a reiteration of what is already 'known' to either Westerners or non Westerners. Revealing some pioneering articles in social anthropology written over a period of twenty years, Judith Okely discusses selected themes which include:
* questions of reflexivity and autobiography
* anthropology in Europe
* the cultural location of the anthropologist
* feminism in anthropology. Illustrated with photographs, Own or Other Culture covers subjects ranging from the author's own boarding school revealing a British exotica and colonial comparisons, to how Gypsies, who treat non-Gypsies as the 'other', act to create or manipulate cultural difference.
Feminist anthropology is developed in a reassessment of de Beauvoir and Kaberry while gender and bodily experience is explored in the face of popular demands by women readers for cross-cultural examples.

Own or Other Culture Reviews

"A major theme of this work is therefore construction of the conventional ideology within anthropology is traced experience living among the Trobriand Islanders. Perhaps the most consistent theme is the theoretical richness to be found in ethnographic investigation. It is argued throughout that attention to the minutiae of culture context is an excellent way to gain theoretical insight."
-Judith Okely, Dept. Social Anthropology, University Edinburgh, Scotland "Sociological Abstracts

Preface Introduction 1. Field in the Home Counties: Double Vision and Dismantled Identity; 2. The Self and Scientism; 3. Trading Stereotypes; 4. Gypsy Women: models in conflict; 5. Fortune-Tellers: Fakes or Therapists; 6. Women Readers: Other Utopias and own Bodily Knowledge; 7. Girls' Bodies: the Curriculum of the Unconscious; 8. Privilege, Schooled and Finished: Boarding Education for Girls; 9. Re-reading The Second Sex; 10. Defiant Moments: Gender, Resistance and Individuals