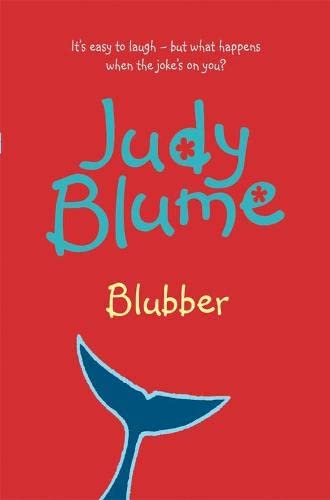 In Stock
£3.99
The classic novel about bullying from America's No.1 children's author.
Very Good Good
Only 1 left

Blubber is a thick layer of fat that lies under the skin and over the muscles of whales . . .

When Linda innocently reads out her class project, everyone finds it funny. Linda can't help it if she's fat, but what starts as a joke leads to a sustained and cruel ritual of humiliation. Jill knows she should defend Linda, but at first she's too scared. When she eventually stands up to the bullies, she becomes their next victim - and what's worse, Linda is now on their side . . .

Judy Blume has written some of the best books of our time about real-life issues - family stress and pressures, what happens when your parents divorce, the problems of growing up and sexual awakening, bereavement - with insight, sensitivity and honesty. The response of readers all around the world continues to make her one of the best-loved writers ever published.

For several decades Judy Blume has been winning legions of fans around the world with her stories. More than 75 million copies of her books have been sold, and her work has been translated into twenty-eight languages. She receives thousands of letters every month from readers of all ages who share their feelings and concerns with her. Judy lives on islands up and down the east coast of America with her husband.

GOR001102807
Blubber by Judy Blume
Judy Blume
Used - Very Good
Paperback
Pan Macmillan
1998-06-05
128
0330398059
9780330398053
N/A
Book picture is for illustrative purposes only, actual binding, cover or edition may vary.
This is a used book - there is no escaping the fact it has been read by someone else and it will show signs of wear and previous use. Overall we expect it to be in very good condition, but if you are not entirely satisfied please get in touch with us.