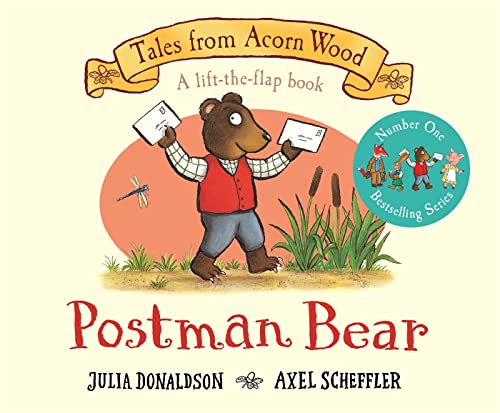 Lift the flaps and join in the fun with this special anniversary edition of the bestselling preschool classic, Postman Bear by Julia Donaldson and Axel Scheffler, creators of The Gruffalo.

Bear is writing letters to his friends. But what could his letters be about? Lift the flaps and join Frog, Squirrel and Mole for Bear's special surprise!

With sturdy flaps on every spread and rhyming stories that are a joy to read aloud, the Tales from Acorn Wood series has been delighting both parents and toddlers for over twenty years. Celebrate their unending appeal with Postman Bear: 20th Anniversary Edition.

Axel Scheffler is a star illustrator whose instantly recognizable, warm and witty illustrations have achieved worldwide acclaim and numerous awards. Axel is the illustrator of some of the world's best-loved picture books, including modern classics The Gruffalo and The Gruffalo's Child. In addition to his picture books, Axel illustrates wonderful novelty and gift books for Macmillan, such as the bestselling The Bedtime Bear, The Tickle Book and Mother Goose's Nursery Rhymes. He is also the illustrator of the popular Pip and Posy series, and other books with Julia Donaldson including The Ugly Five. Axel was the winner of the Illustrator of the Year award in 2018. Born in Hamburg, Axel now lives with his family in London.

NGR9781529023534
Postman Bear: 20th Anniversary Edition by Julia Donaldson
Julia Donaldson
Tales From Acorn Wood
New
Hardback
Pan Macmillan
2020-01-09
12
152902353X
9781529023534
N/A
Book picture is for illustrative purposes only, actual binding, cover or edition may vary.
This is a new book - be the first to read this copy. With untouched pages and a perfect binding, your brand new copy is ready to be opened for the first time.