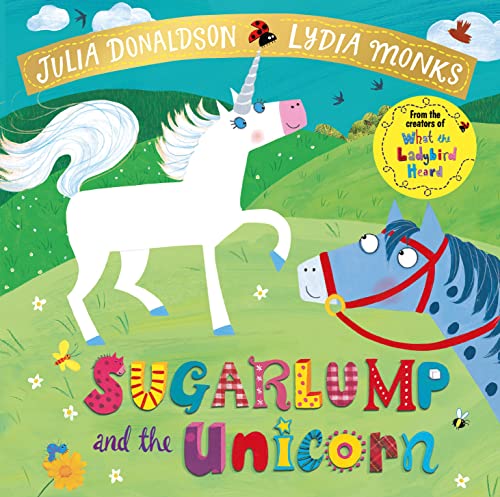 Sugarlump and the Unicorn
by Julia Donaldson

New Price
£6.99
Free Shipping in the UK
Follow the adventures of Sugarlump the rocking horse when a unicorn grants his wish to explore the outside world in this magical adventure story, with a redesigned cover and glitter on every page.
Reviews:
Trustpilot
New£6.99

Sugarlump and the Unicorn Summary

Sugarlump and the Unicorn by Julia Donaldson

Follow the adventures of Sugarlump the rocking horse and a magical unicorn in this delightful rhyming story from the stellar picture book partnership of Julia Donaldson and Lydia Monks, creators of What the Ladybird Heard.

When Sugarlump the rocking horse longs to see the world, a magical unicorn with a silver horn and sparkling blue eyes grants his wish and turns him into a real horse. But after trotting around the farm, galloping around a racetrack and even dancing at the circus, Sugarlump learns to be careful what he wishes for. Luckily the unicorn has one more wish to grant . . .

With brilliant rhyming verse, bright and distinctive illustrations and glitter on every page, Sugarlump and the Unicorn is a perfect story for reading together.

Customer Reviews - Sugarlump and the Unicorn

Sugarlump and the Unicorn Reviews

Lydia Monks is one of the most original and bestselling picture book artists working today. Lydia illustrates several bestselling series including the What the Ladybird Heard adventures and Princess Mirror-Belle, written by Julia Donaldson. Her distinctive use of colour and collage has won her critical acclaim and several awards, including the Royal Mail Scottish Children's Book Award, the Stockport Children's Book Award and multiple nominations for the Kate Greenaway Medal. She is also the author and illustrator of the Twit Twoo School picture books. Lydia lives in Sheffield.