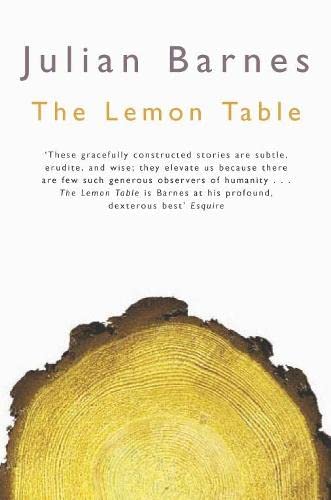 The Lemon Table
by Julian Barnes

In Stock
£4.49
A brilliant collection of new stories from Julian Barnes, each dealing with the nuances of life and its inevitable end.
Very Good
Only 1 left

The Lemon Table by Julian Barnes

The character's in Julian Barnes' new collection of stories are growing old and facing the end of their lives - some with bitter regret, some with resignation and others still with raging defiance. The settings range from nineteenth-century Sweden and Russia to a suburban 'Barnet Shop', where the narrator measure out his life in haircuts, and a South Bank concert hall where a music lover carries out an obsessive campaign of revenge against those who cough in concerts. In 'Knowing French' a fiercely independent eighty-year old begins a correspondence with an author - 'Dear Dr Barnes' - that enriches both their lives. A woman reads elaborate recipes to her sick husband in 'Appetite'; a retired soldier in 'Hygiene' makes his annual trip to attend a regimental dinner, run errands for his wife and spend the afternoon with a tart called Babs.

In a collection that is wise and funny, clever and moving, Julian Barnes has created characters who passions and longings are made all the stronger by the knowledge that, for them, time is almost at an end.

"A master at work, a writer in absolute control of his material. . . . Sweet, sour, bitter, wistful, ruminative, comic, elegiac-The Lemon Table is . . . a joy to read." -"San Francisco Chronicle"
"Beautifully wrought elegies for lost youth, lost promises and lost loves [that] attest to Mr. Barnes's growing depth as a writer, his newly embraced ability to create stories that are as affecting as they are cunning, as emotionally resonant as they are prettily fashioned." -"New York Times"
"Filled with emotional resonance and hard-won wisdom, The Lemon Table is a virtuoso performance of remarkable clarity and insight." -"Los Angeles Times Book Review"
"Mr. Barnes handles his somber material with compassion, verve, shrewd intelligence and a sharp sense of irony. . . . Reading [these stories] is an experience more enlivening than depressing, [even as] mortality itself is ever present and truthfully confronted. -"The Wall Street Journal"
"Barnes is a top-flight precisionist, [with] the steady, pleasing wit of English comic realism, in which sheer intelligence and acute observation carry the whole production, line after line, page after page . . . The Lemon Table, in ways both modest and grand, helps sustain a reader's faith in literature as the truest form of assisted living." -"New York Times Book Review
"
"These gracefully constructed stories are subtle, erudite, and wise; they elevate us because there are few such generous observers of humanity. In a word: The Lemon Table is Barnes at his profound, dexterous best." -"Esquire"
"[Julian Barnes is] one of the most gifted contemporary shapers of prose, possessed of a remarkable limberness of form and voice, and anunconstrained literary imagination." -"The New Republic
"
"The stories in The Lemon Table are quite old-fashioned-in the best sense of the word. They remind one of the deceptive simplicity of the stories of Chekhov or that prodigy of the absurd, Nikolai Gogol. With their underlying classicism, their commitment to truth and beauty, Barnes's stories also harken back to a pre-existential time in which hope was still, in a tragic sort of way, possible." -"Boston Globe"
"
""Barnes can telescope the whole world through a single lens . . . Each story unfolds with masterly speed, diving quickly to the heart of the matter." "-Louisville Courier-Journal"
"Remarkable meditations on loneliness and aging." "-St. Petersburg Times"
"Julian Barnes has many interests [and] a variety of talents that enable him to manage them all . . . The Lemon Table leaves one in no doubt as to Barnes's virtuosity."-"The Guardian"
"
""[A] brave, well-crafted book . . . Barnes describes the realities of aging with precision and a knack for matching narrative device to psychological reality." -"People
""'Were you as young as you felt, or as old as you looked?' This is the conundrum at the heart of The Lemon Table," "[with] assorted pensioners, catty widows, randy old army majors, and noise-sensitive concertgoers forcefully exercising their right not to go gently into that good night." -"Vogue"

GOR001120699
The Lemon Table by Julian Barnes
Julian Barnes
Used - Very Good
Paperback
Pan Macmillan
2005-03-04
208
0330426923
9780330426923
N/A
Book picture is for illustrative purposes only, actual binding, cover or edition may vary.
This is a used book - there is no escaping the fact it has been read by someone else and it will show signs of wear and previous use. Overall we expect it to be in very good condition, but if you are not entirely satisfied please get in touch with us.