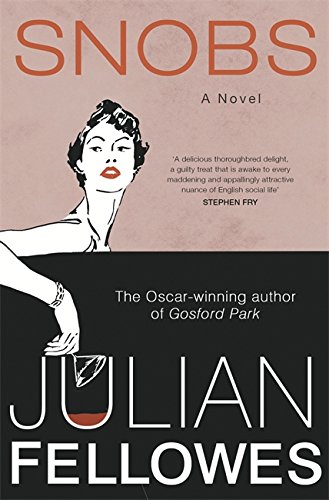 Out of Stock
Witty and enthralling contemporary comedy of manners set against the background of aristocracy, business and actors - by the Oscar winning screenplay writer of the movie 'Gosford Park'.
Like New
Only 0 left

Snobs: A Novel by Julian Fellowes

SNOBS is the story of Edith Lavery, who earns a living answering the telephone in a Chelsea-based estate agents. She is the attractive only child of a comfortably-off accountant. When she attends Royal Ascot as a guest of friends, she meets bachelor Charles Broughton, who as Earl Broughton and heir to the Marquess of Uckfield, is a gossip-column favourite. He proposes, she accepts - and here is the crux of the story: is she really in love with Charles or with his title and all that goes with it? The story is narrated by a journeyman character actor who comfortably moves among the upper and middle classes, while observing their foibles. Superbly observed, the story includes a fabulous character in Charles's mother, Lady Uckfield, known as 'Googie', who wants for her son the daughter of a peer from the old, familiar world she knows and trusts. She perceives Edith to be a young woman on the make, and is vindicated when Edith, now Countess Broughton, falls for a blonde good-looking actor. Fellowes resolves his story with twists and turns aplenty. This is a tale worthy of a contemporary Jane Austen with a dash of Evelyn Waugh.

Julian Fellowes is just marvellous at celebrating the subtle slights that lie beneath aristocratic conversation. Reading his novel SNOBS is a guilty pleasure, owing not just to its bouncy plot, but also to the suspicion that Mr Fellowes knows the territory well. -- John Walsh * HARPERS AND QUEEN *
A delicious comedy of manners on the nuances of English social life, which raises laughter and an occasional wince of recognition. -- Clare Colvin * DAILY MAIL *
This provocative, titillating and seductive novel.......Julian Fellowes tells this anachronistic morality tale with such wit, verve, elegance and shadenfreude that it never loses momentum. -- Andrew Barrow * THE SPECTATOR *
'sparklingly rompish......... the world that Fellowes describes is an unchanging one: that of the landed aristocracy, whose wish since the beginning of time (or at least, since the beginning of titles), is to mix only with their own kind.... Fellowes is a delectable guide to its absurdities. -- Penny Perrick * SUNDAY TIMES *
'a good, fresh, read.... Fellowes has an excellent eye for detail..... Fellowes uses a light dusting of satire to help us enjoy our own snobbery without choking on chippiness. -- Mary Wakefield * DAILY TELEGRAPH *
deliciously waspish satire.... SNOBS is terrific entertainment, deepened by the sad ache of truth -- Lucy Beresford * LITERARY REVIEW *
'The Gosford Park writer's wry look at the English class system is an entertaining dabble in Debrett's. -- Andrea Henry * THE MIRROR *
a delicious contemporary comedy of manners - but it's the spiky Emma Woodhouse-style asides which make SNOBS so irresistible. -- John Koski * YOU MAGAZINE *
Fellowes's attractive, faintly cynical voice has overtones of Trollope, Waugh and Mitford.... this deft entertaining novel.... -- Philip Hoare * INDEPENDENT *
'A deliciously entertaining novel.' * STAR MAGAZINE *
the author of Gosford Park has written a novel so horribly compelling that anyone attempting to read if in the lav would cause a riot on the landing. -- Jane Shilling * THE TIMES *
An affectionate expose from the author of GOSFORD PARK, it reveals the sensibilities of today's dwindling upper classes, and the infiltration of their ranks by the new elite - celebrity hangers-on. * REAL *
It is one of those books one imagines being sent up to Balmoral, come September, where it will be proclaimed divinely funny and quite amazingly true to life. -- Catherine Bennett * THE GUARDIAN *
Fellowes has a nice epigrammatic style. He conjures characters deftly, and although the story is slight, it's sufficient to make the reader want to turn the page. -- Chris Paling * New Humanist *
The style is langorous, elegant and measured ... this absorbing book ... the finely crafted characters ... a riveting social history ... a gripping novel by someone with effortless grasp of character and dialogue that invites comparison with Evelyn Waugh ... his fine honed abilities as a storyteller.' -- Tim Lott * THE EVENING STANDARD *
He is first of all, a true stylist. The prose is good, lucid and polished without painful overwriting. -- Edward Pearce * TRIBUNE *

Julian Fellowes, actor, writer, director, producer, was educated at Ampleforth, Magdalene College, Cambridge and Webber Douglas Academy of Dramatic Art. He trained in repertory theatre at Northampton and Harrogate. As creator, sole writer and executive producer of the hit television series Downton Abbey, Fellowes has won three Emmy awards and a Golden Globe. Fellowes received the Academy Award for Best Original Screenplay for Gosford Park (2002). His work was also honoured by the Writer's Guild of America, the New York Film Critics' Circle and the National Society of Film Critics for Best Screenplay. Other writing credits for film include Piccadilly Jim (2004), Vanity Fair (2004), Young Victoria (2009), The Tourist (2010), Romeo & Juliet (2013), and the three-part drama Doctor Thorne for ITV. Fellowes also wrote and directed the award-winning films Separate Lies and From Time to Time. Fellowes wrote the books for the Tony-nominated stage production of Mary Poppins and for School of Rock: The Musical which opened on Broadway in December 2015, and was written and produced by Andrew Lloyd Webber. Fellowes has authored two novels: the international bestsellers Snobs (2005) and Past Imperfect (2008). Julian Fellowes became a life peer in 2011. He lives in Dorset and London with his wife, Emma.

GOR010556885
Snobs: A Novel by Julian Fellowes
Julian Fellowes
Used - Like New
Hardback
Orion Publishing Co
2004-04-05
320
0297848763
9780297848769
N/A
Book picture is for illustrative purposes only, actual binding, cover or edition may vary.
The book has been read, but looks new. The book cover has no visible wear, and the dust jacket is included if applicable. No missing or damaged pages, no tears, possible very minimal creasing, no underlining or highlighting of text, and no writing in the margins.