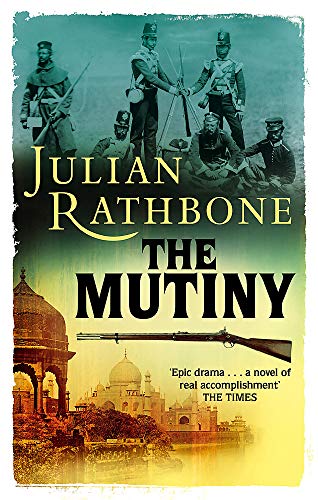 The Mutiny
by Julian Rathbone

In Stock
£4.49
* A devastating portrait of a love affair played out at the height of one of the most violent episodes in British colonial history
Very Good
Only 3 left

The Mutiny by Julian Rathbone

For its British population, the India that swelters in the late spring of 1857 is a place of amateur theatricals, horseracing and flirtations under the aegis of the omnipotent East India company. But a brutal awakening lies in store for the complacent British: one May night, after thirty years of abuse, the East India Company's native soldiers rise up against their British officers. Thus begins the most savage episode in our imperial history. Caught up in the violence is pretty Sophie Hardcastle, a young wife and mother newly arrived from England. As she searches for her infant son, missing in the chaos, Sophie finds herself bearing witness to atrocities on both sides.

Moving, sombre and thrilling, Rathbone's tale is told on a grand scale, ranging from the Cannings in Government House to the heroism of the humblest soldiers and peasants. It is as exhilarating as any Victorian adventure story, and yet, with its unflinching examination of religious fanaticism and the horrors of war, THE MUTINY also carries a powerful message for the modern world.

* 'Harrowing but magnetic ... With his customary rigour, Rathbone marshals extensive research to create the framework of his epic drama. Against this background he weaves the threads of smaller stories, intimate and personal accounts of individual tragedies ... Larger even than the conflict itself is India, elegantly and luminously brought to life in the consistently scintillating prose of this novel of real accomplishment * THE TIMES *
** 'Rathbone sets himself an ambitious challenge in THE MUTINY but he succeeds brilliantly in re-creating the chaos, the savagery and the clash of cultures in India in 1857. The stories of his own characters ... are all woven seamlessly into the wider narra * SUNDAY TIMES *
** 'Although the story of the mutiny has been told many times, it is fascinating to revisit it in such intelligent company ... ambitious, sweeping ... The British, with their quaint slang, and casual, unthinking racism, are very convincingly drawn. Rathbone also elicits great sympathy for the Indian mutineers, with their complex, often contradictory, motives * SUNDAY TELEGRAPH *
** 'Enjoyable and exciting to read ... Rathbone reveals himself to be a novelist of skill, compassion and imagination * TLS *

Julian Rathbone was the author of many books, including the bestselling THE LAST ENGLISH KING, KINGS OF ALBION and the Booker shortlisted JOSEPH, and the hugely acclaimed A VERY ENGLISH AGENT. He died in February 2008.

GOR000982668
The Mutiny by Julian Rathbone
Julian Rathbone
Used - Very Good
Paperback
Little, Brown Book Group
2008-01-24
464
0349119325
9780349119328
N/A
Book picture is for illustrative purposes only, actual binding, cover or edition may vary.
This is a used book - there is no escaping the fact it has been read by someone else and it will show signs of wear and previous use. Overall we expect it to be in very good condition, but if you are not entirely satisfied please get in touch with us.