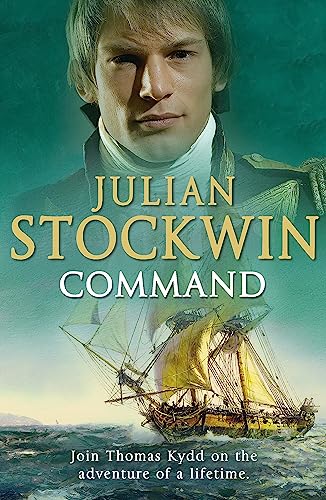 In Stock
£2.99
This is Sharpe with ships - and for readers who love Bernard Cornwell and Patrick O'Brian. The seventh novel in Julian Stockwin's hugely popular seafaring series, published to tie in with the 200th anniversary of Trafalgar
Very Good Good Well Read
7 in stock

Thrilled at his first command, a little brig sloop called Teazer, Thomas Kydd must race to bring his ship to battle readiness - he is desperately needed to defend Malta against Barbary corsairs, ferocious privateers and the French who are frantically trying to rescue the remnants of their army in the Levant. But his jubilation does not last long - peace is suddenly declared and Kydd is left ashore on half pay. A rare chance gives him the opportunity to once again go to sea. He sets sail as captain of a convict transport for the penal colony in New South Wales - and challenges that will test both his seamanship and humanity to the limit.

Stockwin paints a vivid picture of life aboard the mighty ship-of-the-line... the harsh naval discipline, the rancid food, and the skill of the common sailor are all skilfully evoked. * Daily Express on KYDD *
In Stockwin's hands the sea story will continue to entrance readers across the world. * Guardian on KYDD *
The appeal of the story is in the telling, which is atmospheric, authentic ... The author had a long career in the Royal Navy, which adds to his prose that extra dash of salty realism. * Publishing News on MUTINY *
I was soon turning the pages almost indecently fast ... Roll on, the promised adventures of Kydd and Renzi. * Independent on KYDD *

GOR001162653
Command: Thomas Kydd 7 by Julian Stockwin
Julian Stockwin
Used - Very Good
Paperback
Hodder & Stoughton General Division
2007-04-19
368
0340898577
9780340898574
N/A
Book picture is for illustrative purposes only, actual binding, cover or edition may vary.
This is a used book - there is no escaping the fact it has been read by someone else and it will show signs of wear and previous use. Overall we expect it to be in very good condition, but if you are not entirely satisfied please get in touch with us.