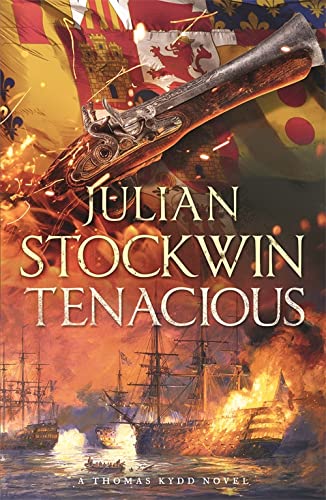 In Stock
£5.49
The sixth novel in Julian Stockwin's seafaring series shows Kydd's ambition starting to dawn, as he realises that now he's an officer there are no limits to where he can go in the Navy.
Very Good Good Well Read
9 in stock

Thomas Paine Kydd is in Halifax enjoying the recognition and favour of his fellow officers when Tenacious is summoned to join Horatio Nelson's taskforce on an urgent reconnaissance mission. Intelligence suggests the French Revolution is about to set the Mediterranean ablaze, but Bonaparte's fleet is nowhere to be found. Nelson and his 'Band of Brothers' begin a desperate search for him.

Kydd's newfound ambition fuels his desire to be at the forefront of the hunt. But with power comes responsibility; with responsibility, accountability. Kydd will face his greatest challenge ever amidst bloodstained seas. And defeat will mean humiliation - or death.

What readers are saying about TENACIOUS

'A really good read, up to now the best in the series' - 5 stars

Praise for Julian Stockwin:
I was soon turning over the pages almost indecently fast ... Roll on, the promised adventures of Kydd and Renzi. * Independent *
The vantage point of the common sailor gives the nautical novel a fresh twist. In Stockwin's hands the sea story will continue to entrance readers across the world. * Guardian *
Stockwin paints a vivid picture of life aboard the mighty ship-of-the-line... the harsh naval discipline, the rancid food, and the skill of the common sailor are all skilfully evoked. * Daily Express *
Gripping . . . Rich in action and full of interesting characters, this thrilling novel leaves you in awe of the 18th-century seaman. * Peterborough Evening Telegraph *

GOR001191686
Tenacious: Thomas Kydd 6 by Julian Stockwin
Julian Stockwin
Used - Very Good
Paperback
Hodder & Stoughton General Division
2006-04-10
368
0340832223
9780340832226
N/A
Book picture is for illustrative purposes only, actual binding, cover or edition may vary.
This is a used book - there is no escaping the fact it has been read by someone else and it will show signs of wear and previous use. Overall we expect it to be in very good condition, but if you are not entirely satisfied please get in touch with us.