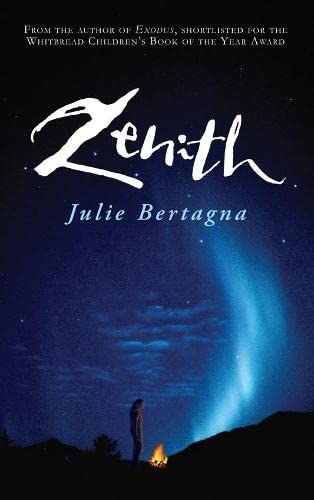 Out of Stock
A novel of extraordinary imaginative vision and emotional power - ZENITH is the eagerly anticipated sequel to the critically acclaimed, bestselling EXODUS.
Very Good
Only 0 left

Sixteen-year-old Mara and her ship of refugees are tracking the North Star, desperate to find a homeland in the melted ice mountains of Greenland. The vast, floating city of Pomperoy is just one of the shocks that are not in their navigation plans. Unwittingly, the refugees bring catastrophe in their wake for Tuck, a gypsea pirate-boy, and also for Ilira - a land whose inhabitants exist in a state of terror at the top of the world.

Back in the drowned ruins at the feet of the towering sky city, Fox is beginning his battle with the cruel, corrupt forces that rule the New World. But separated from Mara, his resolve begins to waver . . .

After an early career as a teacher and freelance feature writer for major Scottish newspapers, Julie Bertagna has quickly established a reputation as an author of powerful and original fiction for young people. EXODUS, her first novel for Macmillan, was shortlisted for the Whitbread Children's Book of the Year Award and won the Lancashire Children's Book of the Year Award and the Angus Award. THE OPPOSITE OF CHOCOLATE was shortlisted for the Book Trust Teenage Prize 2004. Julie lives in Glasgow with her husband and daughter.

GOR000800622
Zenith by Julie Bertagna
Julie Bertagna
Used - Very Good
Paperback
Pan Macmillan
2007-02-02
352
0230015344
9780230015340
N/A
Book picture is for illustrative purposes only, actual binding, cover or edition may vary.
This is a used book - there is no escaping the fact it has been read by someone else and it will show signs of wear and previous use. Overall we expect it to be in very good condition, but if you are not entirely satisfied please get in touch with us.