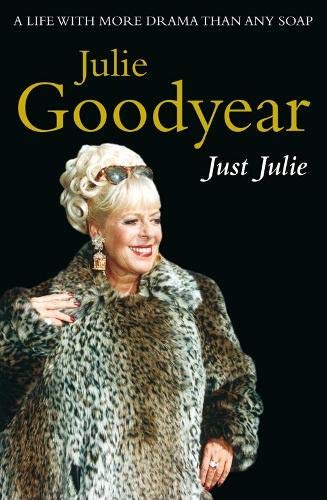 Out of Stock
The astonishingly colourful, fascinating life of the most famous barmaid in the world
Very Good
Only 0 left

For twenty-five years, Julie Goodyear became part of everyone's family when she played Bet Lynch, the loveable brassy barmaid of the Rovers Return in `Coronation Street'. Now, at sixty-four (the age her mother was when she died), Julie feels the time is right to tell her amazing life story.

After Julie's father walked out soon after her birth, Julie was brought up by her mother Alice and stepfather. Her upbringing in Manchester was impoverished but Julie coped largely through the love for her spiritualist grandmother, who Julie would accompany when she was called upon by the local community to lay out the dead. At just thirteen, Julie had to deal with her beloved grandmother's death when she was found in a canal.

Julie fell pregnant at sixteen, bringing shame and embarrassment, before marrying Ray Sutcliffe. The marriage only lasted three years. In 1966 Julie made a six-week appearance in Coronation Street as Bet Lynch from Elliston's Raincoat Factory, a role which made her Britain's best-loved barmaid and a cultural institution.

In 1979, during a routine check up, Julie discovered she had cervical cancer and had two operations. At the time she was given a year to live. Various liaisons during the ensuing decade included Julie's first foray into a same sex relationship with her housekeeper.

In 1987 Julie left Coronation Street for a while to nurse her mother Alice who was dying of terminal cancer. Julie finally quit the series on 2 October 1995 after walking away with a lifetime Achievement Award at the first National Television Awards. In 1996 she was awarded an MBE.

Julie's much anticipated autobiography reveals, for the first time and with incredible candour, the truth, sadness and spirit behind this larger than life woman.

Julie Goodyear was born Julie Kemp in 1942 in Heywood, Lancashire. In 1995, Julie was awarded a Lifetime Achievement Award at the first National Television Awards, in recognition for her role as Bet Lynch in Coronation Street from 1970 to 1995. In 1996, she was awarded an MBE for her services to television and drama.

GOR000815644
Just Julie by Julie Goodyear
Julie Goodyear
Used - Very Good
Paperback
Pan Macmillan
2007-03-16
304
0330449729
9780330449724
N/A
Book picture is for illustrative purposes only, actual binding, cover or edition may vary.
This is a used book - there is no escaping the fact it has been read by someone else and it will show signs of wear and previous use. Overall we expect it to be in very good condition, but if you are not entirely satisfied please get in touch with us.