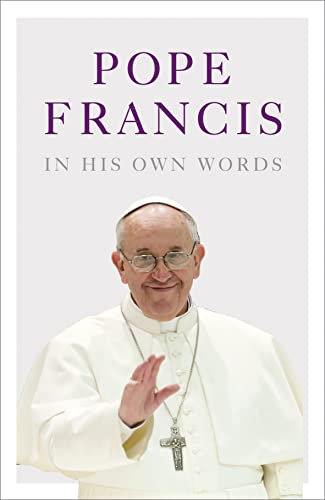 Pope Francis in his Own Words
by Julie Schwietert Collazo

A wide-ranging collection of quotes from the new Pope's writings and speeches, revealing his opinions on the moral issues surrounding the Catholic Church today.

Pope Francis in his Own Words Summary

Pope Francis in his Own Words by Julie Schwietert Collazo

A wide-ranging collection of quotes from the new Pope's writings and speeches, revealing his opinions on the moral issues surrounding the Catholic Church today.

Pope Francis won the hearts of Catholics all over the world when he was elected in March 2013, with his natural humility and commitment to putting those who are poor at the centre of his mission.

Jorge Mario Bergoglio - the 265th successor of St Peter and the first non-European Pope in over 1200 years - has encouraged people to live simpler lives and shown the world a more compassionate face of Catholicism, bringing fresh hope for a renewal in the Church.

In his own life, he has long demonstrated both his belief in simplicity and his concern for those who are poor, refusing to live in palatial accommodation during his tenure as a cardinal in Buenos Aires, riding the bus to work and even persuading the diocese to allow a group of poor missionaries to live in the official residence.

`Pope Francis in His Own Words' has been compiled to give Catholics and non-Catholics alike an insight into the thoughts of the new pontiff.

Julie Schwietert Collazo is a bilingual Catholic writer who has written about everything from scientific research at Guantanamo Bay to fashion design in Nicaragua. She lives in New York. Lisa Rogak is the New York Times bestselling author of more than forty books (including Barack Obama in His Own Words). Her books have been reviewed in scores of publications such as the Wall Street Journal and USA Today. She lives in New Hampshire.

GOR004743230
Pope Francis in his Own Words by Julie Schwietert Collazo
Julie Schwietert Collazo
Used - Very Good
Hardback
HarperCollins Publishers
2013-05-02
192
0007529694
9780007529698
N/A
Book picture is for illustrative purposes only, actual binding, cover or edition may vary.
This is a used book - there is no escaping the fact it has been read by someone else and it will show signs of wear and previous use. Overall we expect it to be in very good condition, but if you are not entirely satisfied please get in touch with us.