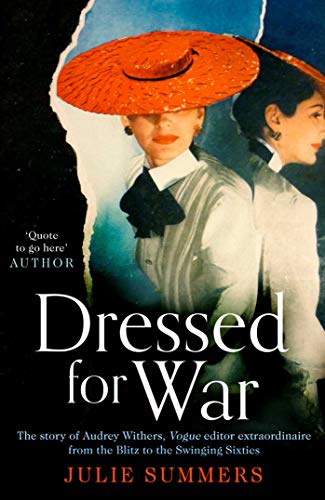 Dressed For War
by Julie Summers

Out of Stock
£13.99
The untold story of how the world's most renowned fashion magazine was brought into the modern world during the cauldron of the Second World War.
Very Good
Only 0 left

Dressed For War: The Story of Audrey Withers, Vogue editor extraordinaire from the Blitz to the Swinging Sixties by Julie Summers

Dressed For War: The Story of Audrey Withers, Vogue editor extraordinaire from the Blitz to the Swinging Sixties is the untold story of our most iconic fashion magazine in its most formative years, in the Second World War. It was an era when wartime exigencies gave its editor, Audrey Withers, the chance to forge an identity for it that went far beyond stylish clothes. In doing so, she set herself against the style and preoccupations of Vogue's mothership in New York, and her often sticky relationship with its formidable editor, Edna Woolman Chase, became a strong dynamic in the Vogue story.

But Vogue had a good war, with great writers and top-flight photographers including Lee Miller and Cecil Beaton - who loathed each other - sending images and reports from Europe and much further afield - detailing the plight of the countries and people living amidst war-torn Europe. Audrey Withers' deft handling of her star contributors and the importance she placed on reflecting people's lives at home give this slice of literary history a real edge. With official and personal correspondence researched from the magazine's archives in London and in New York, Dressed For War will tell the marvellous story of the titanic struggle between the personalities that shaped the magazine for the latter half of the twentieth century and beyond.

Magnificent ... [Audrey] Withers ... has walk-on parts in the biographies of the photographers Lee Miller, Cecil Beaton, Irving Penn and Norman Parkinson, all of whom she nurtured ... Summers' task, then, was to round those pre-existing snippets, along with acres of correspondence, into flesh, and she has done it superbly ... Dressed for War works on many levels: as an evocation of an uncommon time; as a celebration of an uncommon woman; as pure, unalloyed fun. -- Lucy Davies * The Daily Telegraph *
Audrey Withers was just the woman to run a style bible in wartime. -- Ysenda Maxtone Graham * The Times *

Julie Summers is a bestselling writer, researcher and historian. Her books include :Fearless on Everest: The Quest for Sandy Irvine; a biography of her grandfather, the man who built the 'real' bridge over the River Kwai, The Colonel of Tamarkan, Stranger in the House and When the Children Came Home,a social history of servicemen returning to their families from the Second World War. She lives in Oxford.

GOR010428641
Dressed For War: The Story of Audrey Withers, Vogue editor extraordinaire from the Blitz to the Swinging Sixties by Julie Summers
Julie Summers
Used - Very Good
Hardback
Simon & Schuster Ltd
2020-02-06
416
147118157X
9781471181573
N/A
Book picture is for illustrative purposes only, actual binding, cover or edition may vary.
This is a used book - there is no escaping the fact it has been read by someone else and it will show signs of wear and previous use. Overall we expect it to be in very good condition, but if you are not entirely satisfied please get in touch with us.