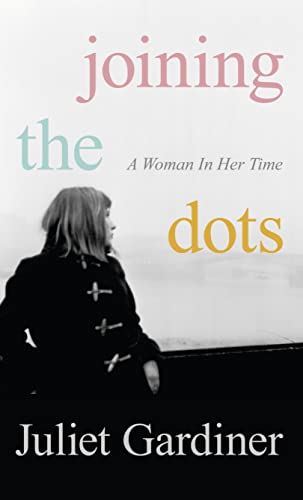 Joining the Dots by Juliet Gardiner

From Britain's leading social historian, a lyrical look at the changes to women's lives since 1940, told with examples from her own life. The book provides an intimate, brilliant account of feminism over the last 6 decades.

Joining the Dots: A Woman In Her Time by Juliet Gardiner

From Britain's leading social historian, a lyrical look at the changes to women's lives since 1940, told with examples from her own life. The book provides an intimate, brilliant account of feminism over the last 6 decades.

"A young woman wearing a navy-blue duffle coat stood shivering in the vaulted Victorian booking hall of Temple Meads station in Bristol looking uncertainly around her. It was 1st January 1960 and the woman was me. I was sixteen years old, and I had run away from home."

Over the next ten years, the world changed around young Juliet Gardiner - as it did for most women in Britain. It was the start of a decade that was to be momentous for Britain's history - politically, economically, socially and culturally.

As one of Britain's best-known social historians, Juliet Gardiner writes here about the span of women's lives from her birth during the Second World War to the election of Margaret Thatcher as prime minister. Using episodes from her own life as starting points to illuminate the broader history in society at large, she explores changing ideas towards birth and adoption, the importance of education for girls, the opportunities offered by university, to expectations of work and motherhood, not to mention her generation's yearning for freedom.

Everyone has his or her history and at the same time is part of history as this book so perceptively and beautifully demonstrates. As a work of living history, both lyrical and personal, Joining the Dots is an accessible and empowering story of how one mid-twentieth-century woman grew into a world so different from the one into which she was born. It is a story of bed-sits, sexual choice, motherhood and marriage, feminism, family planning and professional ambition.

`An accomplished and intensely evocative memoir that will become in time an integral part of our understanding of post-war Britain. It is also, at a personal level, a journey of courage and determination' Books of the Year, David Kynaston, Observer

`Refreshingly unconcerned with self-excavation ... the beauty of the book is in its flow from the particular to the general... the vast consolation and pleasure of this generous book is its conviction that we are all more than one life allows' TLS

`Gardiner has, in this remarkable and moving book, joined the dots' Daily Telegraph

`Gardiner's riveting memoir should be compulsory reading for any woman born in the last seventy or so years ... what she does so engagingly well here is to tell her own highly personal story, then set it in contemporary context ... Gardiner has given us in Joining the Dots another volume of utterly compelling and insightful social history about the century we have recently emerged from' Literary Review

`Juliet Gardiner is well known for her superbly researched books on slices of British social history ... in this short memoir ... she turns the spotlight on her own story. It's every bit as fascinating as her wider works' Country Life

`In this lyrical, perceptive book, Gardiner "joins the dots" in a memoir that describes life from the end of the Second World War to the 1980s' Sunday Express

Juliet Gardiner is a respected commentator on British social history from the Victorian times through to the 1950s. She was Editor of History Today magazine and is also the author of the critically acclaimed and bestselling `Wartime'.

GOR008816558
9780007489169
0007489161
Joining the Dots: A Woman In Her Time by Juliet Gardiner
Juliet Gardiner
Used - Very Good
Hardback
HarperCollins Publishers
2017-08-10
208
N/A
Book picture is for illustrative purposes only, actual binding, cover or edition may vary.
This is a used book - there is no escaping the fact it has been read by someone else and it will show signs of wear and previous use. Overall we expect it to be in very good condition, but if you are not entirely satisfied please get in touch with us
Trustpilot