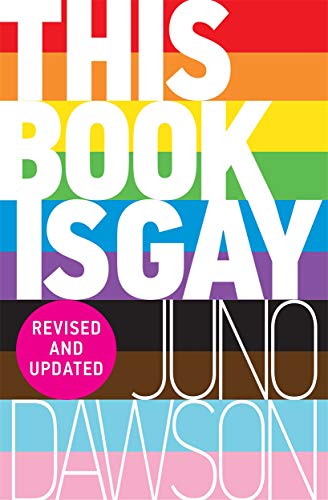 This Book is Gay by Juno Dawson

A funny and pertinent book about being lesbian, bisexual, gay, queer, transgender or just curious - for everybody, no matter their gender or sexuality Former PSHCE teacher and acclaimed YA author Juno Dawson gives an uncensored look at what it's like to grow up as LGBT.

This Book is Gay by Juno Dawson

A funny and pertinent book about being lesbian, bisexual, gay, queer, transgender or just curious - for everybody, no matter their gender or sexuality Former PSHCE teacher and acclaimed YA author Juno Dawson gives an uncensored look at what it's like to grow up as LGBT. Including testimonials from people across the gender and sexual spectrums, this frank, funny, fully inclusive book explores everything anyone who ever dared to wonder wants to know - from sex to politics, how to pull, stereotypes, how to come-out and more. Spike Gerrell's hilarious illustrations combined with funny and factual text make this a must-read.
The book every LGBT person would have killed for as a teenager, told in the voice of a wise best friend. * Patrick Ness *
A brave, funny, indignant look at what it means to grow up as LGTBQ. * Metro *
Funny, wise and utterly pragmatic this is a brilliant readable and informative book... which could not only help teens become more at ease in their own skin as they work out the details of who they are, but could change your entire school culture, for the better. * Teach Secondary *
Filling an important gap in non-fiction publishing is this frank, funny and very welcome exploration of gender and sexuality. * The Bookseller *
Frank and funny * Now magazine *
It's impossible to overstate the importance of a book like this * Gay Community News *
A fantastic book for classrooms and school libraries, This Book is Gay is a must-read for teachers and parents, as well as teens themselves. * Liverpool Echo *
Queen of Teen 2014 Juno Dawson is the multi award-winning author of dark teen thrillers Hollow Pike, Cruel Summer, Say Her Name and Under My Skin, written under the name James Dawson. In 2015, she released her first contemporary romance, All ofthe Above. Margot and Me was published in 2017 and nominated for the Carnegie CILIP Medal 2018. Her first non-fiction book, Being a Boy, tackled puberty, sex and relationships, and a follow-up for young LGBT people, This Book Is Gay, came out in 2014, and a guide to mental health for young people, Mind Your Head, followed in2016. Juno is a regular contributor to Attitude, GT, Glamour and the Guardian and has contributed to news items concerning sexuality, identity, literature and education on BBC Woman's Hour, Front Row, This Morning and Newsnight.She is a School Role Model for the charity Stonewall, and also works with the charity First Story to visit schools serving low-income communities. Juno's titles have received rave reviews and her books have been translated into more than ten languages. Say Her Name was shortlisted for the YA Book Prize 2015, and Margot and Me was shortlisted for the Lancashire Libraries Book of the Year 2018. In 2018 she was shortlisted for the Women in Creative Industries award. In 2015, Juno announced her transition to become a woman, having lived thus far as the male author James Dawson. She writes fulltime and lives in Brighton. Follow Juno on Twitter: @junodawson or on Facebook at Juno Dawson Books.
NGR9781471403958
This Book is Gay by Juno Dawson
Juno Dawson
New
Paperback
Hot Key Books
2014-09-01
288
1471403955
9781471403958
N/A
Book picture is for illustrative purposes only, actual binding, cover or edition may vary.
This is a new book - be the first to read this copy. With untouched pages and a perfect binding, your brand new copy is ready to be opened for the first time
Trustpilot