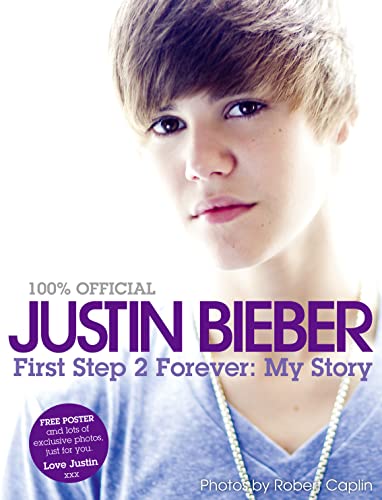 Join the world's hottest pop star on his rollercoaster ride to superstardom...plus FREE wall poster, just for you!

Join the world's hottest pop star on his rollercoaster ride to superstardom...plus FREE wall poster, just for you!

His debut album has already gone platinum. He's sung for the President of the United States. His screaming fans have stormed TV studios and shut down shopping malls. Justin Bieber is a global superstar and now, for the first time ever, he's going to tell all in his very own book.

Justin's story is the stuff that every kid dreams of. Growing up an only child in Ontario, Canada, Justin had a natural talent for music; he was forever singing around the house and taught himself to play drums, guitar, piano and trumpet. He entered a local singing competition and despite not having had any vocal coaching, Justin came second aged only 12 years old.

But it was when he posted homemade pop videos on YouTube that Justin's dreams really came true: the videos quickly became a word-of-mouth sensation, garnering an astonishing 10 million hits. Months later, Justin was spotted by top music manager Scooter Braun who later joined forces with superstar Usher to sign 13-year-old Justin to Island Def Jam. And the rest, as they say, is history.

In his very first book, complete with free wall poster, Justin will tell the story of his amazing journey from small-town schoolboy to global superstar. Stunningly designed and jam packed full of exclusive unseen photos of Justin on and off stage, plus private captured moments, the awesome story of Justin's phenomenal rise to superstardom is a must-have for any true fan.

'A must-have for every fan!' Top of the Pops Magazine

`Your little sister/cousin/niece will love it' Heat

`Contains loads of amazing pictures and secrets about his rise to fame.' Teen Now

`Brilliant... A must-have for any true Justin Bieber fan.' Mizz

Born in Stratford, Ontario, Justin Bieber is a multi-talented singer and musician. Spotted at just twelve years old, Justin's first album, My World, was certified platinum within three months of its release and went on to be the first debut album ever to have seven songs on the Billboard Top 100. His latest album, My World 2.0, debuted at #1 on the charts, and has gone on to sell over five million copies worldwide. This #1 debut made Justin the youngest male solo artist to top the chart since Stevie Wonder in 1963. This is Justin's first book.

GOR002526847
9780007395934
0007395930
Justin Bieber - First Step 2 Forever, My Story by Justin Bieber
Justin Bieber
Used - Very Good
Hardback
HarperCollins Publishers
2010-10-14
240
N/A
Book picture is for illustrative purposes only, actual binding, cover or edition may vary.
This is a used book - there is no escaping the fact it has been read by someone else and it will show signs of wear and previous use. Overall we expect it to be in very good condition, but if you are not entirely satisfied please get in touch with us
Trustpilot