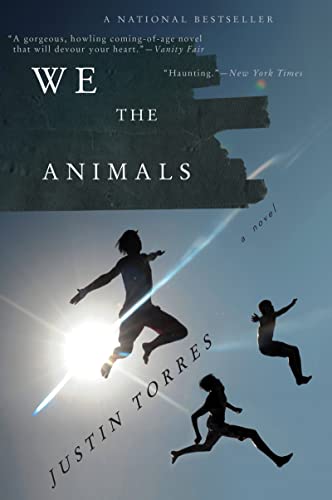 We the Animals
by Justin Torres

In Stock
£14.99
Follow three brothers as they tear their way through childhood, growing up in the shadow of Paps and Ma, and learning a kind of love that is serious, dangerous, unshakable, and glorious.
Very Good
Only 1 left

We the Animals Summary

We the Animals by Justin Torres

In this groundbreaking debut, Justin Torres plunges us into the chaotic heart of one family, the intense bonds of three brothers, and the mythic effects of this fierce love on the people we must become.

"We the Animals is a dark jewel of a book. It's heartbreaking. It's beautiful. It resembles no other book I've read."--Michael Cunningham

"A miracle in concentrated pages, you are going to read it again and again." --Dorothy Allison

"A fiery ode to boyhood . . . A welterweight champ of a book." --NPR, Weekend Edition

"A tremendously gifted writer whose highly personal voice should excite us in much the same way that Raymond Carver's or Jeffrey Eugenides's voice did when we first heard it." --Washington Post

"A novel so honest, poetic, and tough that it makes you reexamine what it means to love and to hurt." --O, The Oprah Magazine

"The communal howl of three young brothers sustains this sprint of a novel . . . A kind of incantation." --The New Yorker

We the Animals Reviews

JUSTIN TORRES is a graduate of the Iowa Writers' Workshop, a recipient of a Rolon Fellowship in Literature from United States Artists, and a Wallace Stegner Fellow at Stanford.

GOR004713057
We the Animals by Justin Torres
Justin Torres
Used - Very Good
Paperback
Cengage Learning, Inc
2012-09-11
128
0547844190
9780547844190
N/A
Book picture is for illustrative purposes only, actual binding, cover or edition may vary.
This is a used book - there is no escaping the fact it has been read by someone else and it will show signs of wear and previous use. Overall we expect it to be in very good condition, but if you are not entirely satisfied please get in touch with us.