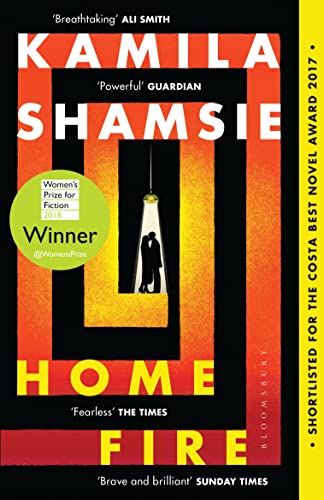 Home Fire: WINNER OF THE WOMEN'S PRIZE FOR FICTION 2018 by Kamila Shamsie

NOW A BBC RADIO 4 BOOK AT BEDTIME WINNER OF THE WOMEN'S PRIZE FOR FICTION 2018 WINNER OF THE LONDON HELLENIC PRIZE SHORTLISTED FOR THE INTERNATIONAL DUBLIN LITERARY AWARD SHORTLISTED FOR THE COSTA NOVEL AWARD 2017 SHORTLISTED FOR THE DSC PRIZE FOR SOUTH ASIAN LITERATURE 2018 LONGLISTED FOR THE MAN BOOKER PRIZE 2017 'A BOOK OF THE YEAR, 2017' - GUARDIAN, OBSERVER, TELEGRAPH, NEW STATESMAN, EVENING STANDARD, NEW YORK TIMES 'The book for our times' Judges of the Women's Prize 'Elegant and evocative ... A powerful exploration of the clash between society, family and faith in the modern world' Guardian Isma is free. After years spent raising her twin siblings in the wake of their mother's death, she is finally studying in America, resuming a dream long deferred. But she can't stop worrying about Aneeka, her beautiful, headstrong sister back in London - or their brother, Parvaiz, who's disappeared in pursuit of his own dream: to prove himself to the dark legacy of the jihadist father he never knew. Then Eamonn enters the sisters' lives. Handsome and privileged, he inhabits a London worlds away from theirs. As the son of a powerful British Muslim politician, Eamonn has his own birthright to live up to - or defy. Is he to be a chance at love? The means of Parvaiz's salvation? Two families' fates are inextricably, devastatingly entwined in this searing novel that asks: what sacrifices will we make in the name of love? A contemporary reimagining of Sophocles' Antigone, Home Fire is an urgent, fiercely compelling story of loyalties torn apart when love and politics collide - confirming Kamila Shamsie as a master storyteller of our times.

GOR009369944
Home Fire: WINNER OF THE WOMEN'S PRIZE FOR FICTION 2018 by Kamila Shamsie
Kamila Shamsie
Used - Like New
Paperback
Bloomsbury Publishing PLC
2018-03-22
288
1408886790
9781408886793
Long-listed for The Man Booker Prize for Fiction 2017 Long-listed for Women's Prize for Fiction 2018
Book picture is for illustrative purposes only, actual binding, cover or edition may vary.
This is a used book - there is no escaping the fact it has been read by someone else and it will show signs of wear and previous use. Overall we expect it to be in very good condition, but if you are not entirely satisfied please get in touch with us.