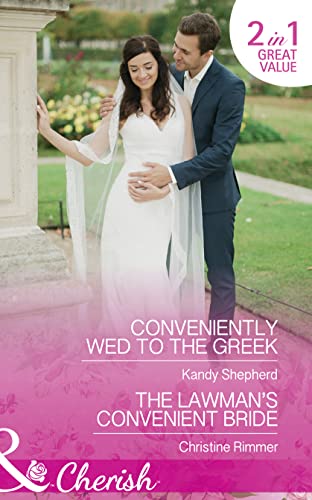 Conveniently Wed To The Greek
by Kandy Shepherd

Conveniently Wed to the Greek
by Kandy Shepherd

When luxury hotelier Alex Mikhalis encounters the blogger who once nearly destroyed his reputation, he wants to get even. Only Adele Hudson isn't exactly as he remembers. She's pregnant, alone and he can't stop his protective instincts kicking in!

Conveniently Wed To The Greek Summary

Conveniently Wed to the Greek
by Kandy Shepherd

When luxury hotelier Alex Mikhalis encounters the blogger who once nearly destroyed his reputation, he wants to get even. Only Adele Hudson isn't exactly as he remembers. She's pregnant, alone and he can't stop his protective instincts kicking in!

After a difficult break up, Adele is very wary of all relationships. She had no choice but to accept the Greek tycoon's offer of a job, despite their complicated past. But his next suggestion is much more intimate: becoming his convenient wife!

Feisty, fearless Jody Bravo's set to do everything for her baby. She doesn't need anything from anyone-especially the stepbrother of her baby's late father. But lawman Seth Yancy won't leave her to face parenthood alone, no matter how prepared she is. And even though Jody resists, soon she's taken in completely by his charms-and agrees to be his wife...

Hunky Sheriff Yancy's not without his fair share of admirers in Justice Creek. After a terrible tragedy years before, though, he's faced life alone. Now the real-life woman of his dreams just happens to be his bride-and pregnant with the child of his heart, if not his reality. So "father" is a role that will come naturally to Seth. And will "husband" really be that far behind?

Kandy Shepherd swapped a fast-paced career as a magazine editor for a life writing romance. She lives on a small farm in the Blue Mountains near Sydney, Australia, with her husband, daughter, and a menagerie of animal friends. Kandy believes in love at first sight and real-life romance-they worked for her! Kandy loves to hear from her readers. Visit her website at: www.kandyshepherd.com A New York Times bestselling author, Christine Rimmer has written over ninety contemporary romances for Harlequin Books. Christine has won the Romantic Times BOOKreviews Reviewers Choice Award and has been nominated six times for the RITA Award. She lives in Oregon with her family. Visit Christine at http://www.christinerimmer.com.

GOR008268841
Conveniently Wed To The Greek: Conveniently Wed to the Greek / The Lawman's Convenient Bride (The Bravos of Justice Creek, Book 7) by Kandy Shepherd
Kandy Shepherd
Used - Very Good
Paperback
HarperCollins Publishers
2017-04-06
416
0263922960
9780263922967
N/A
Book picture is for illustrative purposes only, actual binding, cover or edition may vary.
This is a used book - there is no escaping the fact it has been read by someone else and it will show signs of wear and previous use. Overall we expect it to be in very good condition, but if you are not entirely satisfied please get in touch with us.