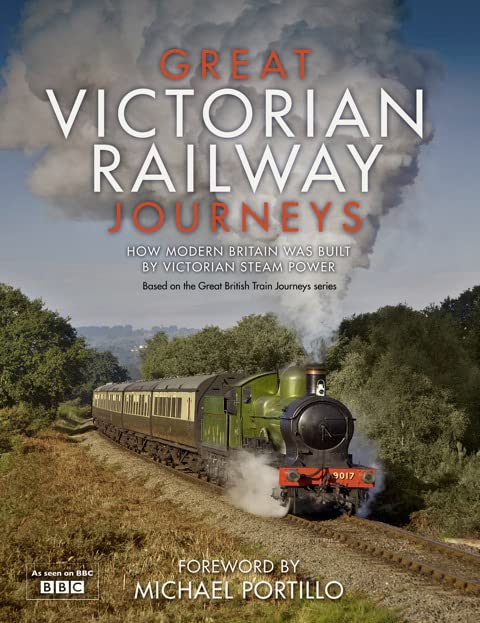 Great British Railway Journeys has been a hugely successful TV programme, which is now into its third series on BBC2. Much as Michael Palin built up a dedicated fan base for travel around the globe, so Michael Portillo has done likewise for lovers of trains in his explorations the length and breadth of the United Kingdom from the window of a train seat.

Both charming and insightful, Michael again uses Bradshaw's guides, and now undertakes five unique journeys that were constructed by the Victorians from 1830-1900. Across 25 episodes he delves into this fascinating and colourful period of our history, and show how the modern British landscape was created from this Victorian legacy. From Windsor to Weymouth, Great Yarmouth to London, Oxford to Milford Haven, Berwick to Barrow, and finally Dublin to Belfast - Michael will go back in time to showcase areas of outstanding Victorian engineering and design across Queen Victoria's dominions. Key parts of the programme and tie-in book will showcase how the world's very first fixed-track train in Merthyr Tydfil operated; how the world's first electric train service ran in Southend to its famous pier; and he also celebrates the wide variety of lines that opened up trade and mobility to the Victorian classes.

Travelling on a variety of existing, and in some cases restored, Victorian train lines, he meets their passionate supporters who lovingly work on them, and also looks at the modern landscape to tell the story of how each area was shaped by their Victorian forebears. Lavishly produced, this will once again be a 'must have' purchase for all train lovers, as well as those who simply want to find out their heritage and what is now available to view and travel upon in the 21st century to transport them back in time.

GOR004389932
Great Victorian Railway Journeys: How Modern Britain was Built by Victorian Steam Power by Karen Farrington
Karen Farrington
Used - Very Good
Hardback
HarperCollins Publishers
2012-01-19
256
0007457065
9780007457069
N/A
Book picture is for illustrative purposes only, actual binding, cover or edition may vary.
This is a used book - there is no escaping the fact it has been read by someone else and it will show signs of wear and previous use. Overall we expect it to be in very good condition, but if you are not entirely satisfied please get in touch with us.