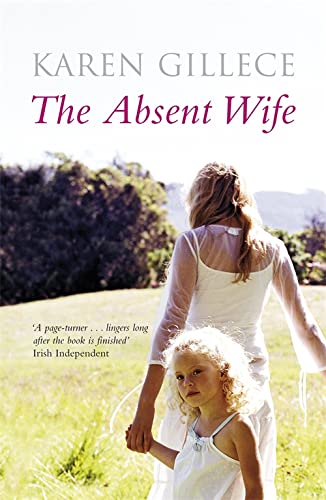 The Absent Wife
by Karen Gillece

In Stock
£3.99
20 years after Leo Quick was abandoned by his wife, Fleur, and left to raise their two children, he receives a call to inform him that she has died. She has left behind a daughter, Star, a third child to whom Leo is father. With Star's arrival, long-buried hurts resurface as each of the Quicks confront the legacy of Fleur's desertion.
Very Good Good
Only 3 left

The Absent Wife by Karen Gillece

Twenty years after Leo Quick was abandoned by his wife and left to raise their two small children, he receives a phone call bringing explosive news. Fleur, his wife, who went Africa in the fervour of Live Aid, never to be seen or heard from again, has died in Kenya. She has left behind a daughter, Star, a third child to whom Leo is father, though he knew nothing of her existence till now.

In his wife's absence, Leo has found new love with Denise, and together they have raised his two children. But the consequences of their childhood abandonment are playing out. Kester, his son, has a cocaine habit that is spiraling out of control, and Silvia is haunted by a sense of loneliness and struggling with her own demons.

With Star's arrival, long-buried hurts resurface as each of the Quicks confront the legacy of Fleur's desertion. A story of the secrets we keep and the consequences of acting upon our desires, The Absent Wife is a darkly witty, knowing and gripping exploration of a modern family in crisis.

Praise for Karen Gillece's novels * * *
'Reminiscent of Joanna Trollope ... this book sets Karen Gillece apart from much of the Irish popular fiction norm and confirms her as a force to be reckoned with' * The Irish Times *
One of Ireland's finest emerging writers...she has a wonderful way with words and the ability to sum up a character in a sentence' * Irish Examiner *
A moving read that will keep you gripped to the very end * RTE Guide *
'A compelling read, and a chilling one. Gillece has dared to push boundaries. And the result is simply unforgettable' * Irish Examiner *
'Gillece captures the characters skilfully' * The Irish Mail on Sunday *
'A page-turner' * Irish Independent *
'Queen of emerging Irish writers' * Irish Independent *
'Evidence that this is a talented author expanding her range and reach' * Irish Examiner Weekender *
'This second novel confirms the promise of Gillece's debut . . . she is no one hit wonder. She is improving with time and for once the publisher's prediction that readers will "anxiously await her next offering" doesn't ring hollow. * Irish Independent *
'It is a glorious read, confirming Gillece as a fine literary writer. Gillece has a wonderful way with words, and an ability to sum up a character in a sentence . . . skilful at showing the intricacies of relationships that have gone wrong. I simply adored this novel, and was immersed in it, totally, from the start until the final pages . . . I was intrigued with all her flawed, yet fascinating characters. They stayed in my mind long after I had finished reading. * Books Ireland *
Gillece writes vividly, capturing the essence of ordinary lives turned upside down by unavoidable dilemmas...highly impressive and assured writing * Evening Herald *
Wonderfully sensitive...rises head and shoulder above most Irish novels of recent years * Irish Independent *

Karen Gillece was born in Dublin in 1974. She studied Law at University College Dublin and worked for several years in the telecommunications industry before turning to writing full-time. She was shortlisted for the Hennessy New Writing Award in 2001 and her short stories have been widely published in literary journals and magazines. Her first novel Seven Nights in Zaragoza was published to widespread acclaim as was her second offering Longshore Drift, which was followed by My Glass Heart. The Absent Wife is Karen's third novel.

GOR002823764
The Absent Wife by Karen Gillece
Karen Gillece
Used - Very Good
Paperback
Hachette Books Ireland
2008-11-06
384
0340924500
9780340924501
N/A
Book picture is for illustrative purposes only, actual binding, cover or edition may vary.
This is a used book - there is no escaping the fact it has been read by someone else and it will show signs of wear and previous use. Overall we expect it to be in very good condition, but if you are not entirely satisfied please get in touch with us.