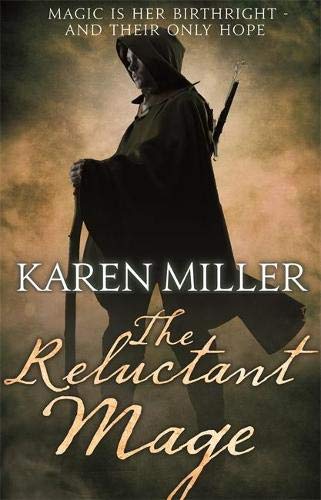 The Reluctant Mage
by Karen Miller

The Reluctant Mage: Book Two of the Fisherman's Children by Karen Miller

'The Reluctant Mage is one of those rare tales that keep you entertained from beginning to end' - sfbook.com

It's been months since Rafel ventured over Barl's Mountains into the unknown, in a desperate bid to seek help. With his father's Weather Magic exhausted and Lur ravaged by polluting magics, there seemed no other hope. Now this too has died.

Only Deenie believes Rafel still lives, sensing her brother in tortured dreams. She also knows she must try to find him, as only Rafel's talents could heal their land. The prospect terrifies Deenie, yet she sees no other choice. But she finds the lands beyond Lur blighted with lawlessness and chaos - and here Deenie and her companion Charis find the dark sorcerer Morg's deadly legacy.

As they travel, they learn of a dangerous new power in the land. Deenie comes to suspect that not only is her brother involved, but that the evil their father destroyed is somehow reborn. And if she can't save Rafel then, through him, Morg's vast power could once again command their world.

The Reluctant Mage is the sequel to The Prodigal Mage, and set in the same world as Karen Miller's bestselling debut The Innocent Mage. With her cast of unforgettable characters, and masterful storytelling, Karen Miller has once again created an irresistible drama of political intrigue and magical adventure.

Kingmaker, Kingbreaker Series
The Innocent Mage
The Awakened Mage
A Blight of Mages

Godspeaker
Empress of Mijak
The Riven Kingdom
The Hammer of God

Miller is clearly a very talented writer: her characterisation is a masterclass in nuance and sensitivity, and she has a visceral way with action ... a compelling portrait of a blighted world in the company of flawed, fascinating people -- SFX
Strong characters with clear viewpoints carry the story forward ... this new series shows great potential -- PUBLISHERS WEEKLY
The Reluctant Mage is one of those rare tales that keep you entertained from beginning to end * SFBOOK.COM *

Karen Miller was born in Vancouver, Canada, and came to Australia with her family when she was two. Apart from a two-year stint in the UK she's lived around Sydney ever since. She has held a variety of interesting jobs and fell in love with speculative fiction at primary school.

GOR002896469
The Reluctant Mage: Book Two of the Fisherman's Children by Karen Miller
Karen Miller
Kingmaker, Kingbreaker
Used - Very Good
Paperback
Little, Brown Book Group
2011-07-07
576
1841497495
9781841497495
N/A
Book picture is for illustrative purposes only, actual binding, cover or edition may vary.
This is a used book - there is no escaping the fact it has been read by someone else and it will show signs of wear and previous use. Overall we expect it to be in very good condition, but if you are not entirely satisfied please get in touch with us.