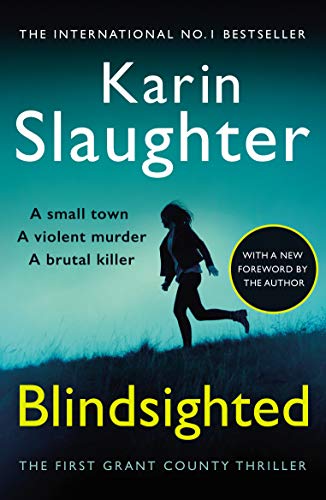 In Stock
£4.49
Police chief Jeffrey Tolliver - Sara's ex-husband - is in charge of the investigation, and when a second victim is found, crucified, only a few days later, both Jeffrey and Sara have to face the fact that Sibyl's murder wasn't a one-off attack.
Very Good Good
9 in stock

The first book in Karin Slaughter's #1 bestselling GRANT COUNTY series. She was found in the local diner. Brutally murdered. Ritually mutilated. And she won't be the last. ___________________ The sleepy town of Heartsdale, Georgia, is jolted into panic when Sara Linton, paediatrician and medical examiner, finds Sibyl Adams dead in the local diner. As well as being viciously raped, Sibyl has been cut: two deep knife wounds form a lethal cross over her stomach. But it's only once Sara starts to perform the post-mortem that the full extent of the killer's brutality becomes clear. Police chief Jeffrey Tolliver - Sara's ex-husband - is in charge of the investigation, and when a second victim is found, crucified, only a few days later, both Jeffrey and Sara have to face the fact that Sibyl's murder wasn't a one-off attack. What they're dealing with is a seasoned sexual predator. A violent serial killer...

"Don't read this alone. Don't read this after dark. But do read it" * Daily Mirror *
"This gripping debut novel, filled with unremittingly graphic forensic details, is likely to have Patricia Cornwell and Kathy Reichs glancing nervously in their rearview mirrors because rookie Karin Slaughter is off the starting grid as quickly as Michael Schumacher and is closing on them fast" * Irish Independent *
"Chilling but thrilling" * OK! *
"Slaughter ... brings the story to a shattering climax" * Sunday Telegraph *
"Wildly readable... [Slaughter] has been compared to Thomas Harris and Patricia Cornwell, and for once the hype is justified ... deftly craf ted, damnably suspenseful and, in the end, deadly serious ... Slaughter 's plotting is brilliant, her suspense relentless" * Washington Post *

GOR002823948
Blindsighted: (Grant County series 1) by Karin Slaughter
Karin Slaughter
Grant County
Used - Very Good
Paperback
Cornerstone
2011-06-23
416
0099553058
9780099553052
N/A
Book picture is for illustrative purposes only, actual binding, cover or edition may vary.
This is a used book - there is no escaping the fact it has been read by someone else and it will show signs of wear and previous use. Overall we expect it to be in very good condition, but if you are not entirely satisfied please get in touch with us.